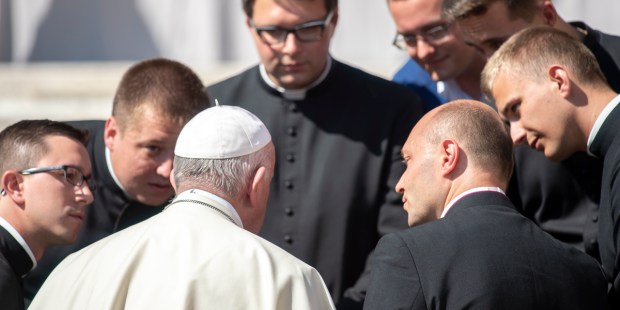 It is possible to question the discipline mandating priestly celibacy, without expecting a “drastic change,” says Cardinal Pietro Parolin, the pope’s secretary of state, in statements reported by the Italian media outlet Il Fatto Quotidiano on October 2.

The magisterium is not an “immutable monolith” but a “living organism that grows and develops,” said Cardinal Parolin in remarks from an interview with the Italian-language newspaper America Oggi. This does not mean that the magisterium changes, but that it “becomes enriched.” The teaching on ecclesiastical celibacy, the cardinal explained, goes back to the “apostolic tradition” but is not applied in some Eastern Catholic Churches.

During the interview, the Secretary of State said he was “convinced” of the need to “ask questions” to verify whether priestly celibacy “is lived in all its potentialities and if it is appreciated and valued.” However, he immediately clarified, we should not expect a “drastic change” on the issue but a “gradual deepening” for the benefit of all and the proclamation of the Gospel.

Today’s questions are to be addressed in the light of the “precious legacy” of the Church’s history, said the Vatican’s second in command, so that the answers can allow the people of God to “grow harmoniously.” These questions, he noted, can not all be answered immediately, and sometimes asking the question is more important than answering it, he said.

Already in 2013, Cardinal Parolin had noted that priestly celibacy is “not a dogma” but an “ecclesiastical tradition” and that discussion was therefore possible. This question could be studied during the October 2019 Synod dedicated to Amazonia, an area where vast territories suffer from the lack of priests. The Synod Fathers could therefore look into the question of the ordination of “viri probati,” that is, married men of proven virtue.