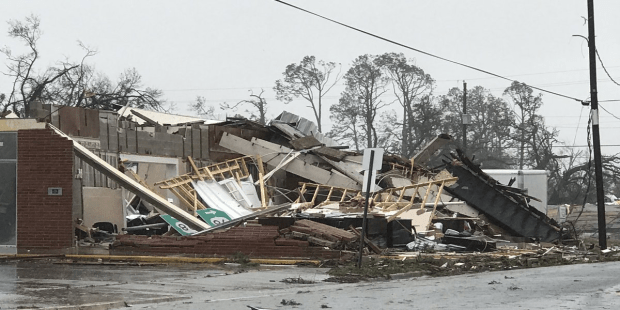 Catholic Charities has donated $1 million to the relief effort.

The clouds have dispersed and the winds have abated, but while the Florida sky shows a beautiful day, a look to the ground shows the wreckage left by the passing of Hurricane Michael. The storm, which claimed the lives of 17 so far, saw winds higher than 155 mph at landfall –strong enough to rip entire roofs off houses and tear pavement from the roads.

Now the people of Florida’s Panhandle and southern Georgia, who took the brunt of the ferocious tempest, are tasked with clearing a monumental amount of debris, and in some cases, rebuild their houses from nothing.

In Panama city, one of the hardest hit areas, winds were strong enough to blow out the windows of apartment complexes. One Twitter user, @DavidMuir shared the view from his own shattered window, while another picture offers a view of a completely trashed office complex.

Another Twitter user, @jwhittalTWN, took a video of Panama City as she drove along what was left of the town’s businesses. In this chilling clip, the driver is describing the wind speed, but his voice is drowned out as as he hangs the camera out the window to give the viewer a better glimpse.

Social media is full of photos and videos of the storm, but it also helped out FEMA during the storm. WSB radio reports, FEMA workers were monitoring various social media sites in order to determine the places that most needed help from the rescue workers. Lora Goza, the Night Supervisor at the District Four command center in Dekalb County, said:

“[The sites] keep us informed from their perspective from what they are seeing,” Goza says. “And that can help us determine what areas we need to concentrate our efforts.”

Volunteers are flocking to the affected areas in order to help the restoration effort. Many charities are already on the scene, including Catholic Charities, who issued a check for $1 million to Catholic Charities of Northwest Florida, on Monday. Sister Donna Markham commented:

“When we bring donations like that here that is to help people stay alive. They need water, lodging, food, they probably have a few things to get them by for the first day or two but they need help and they need it right now.”