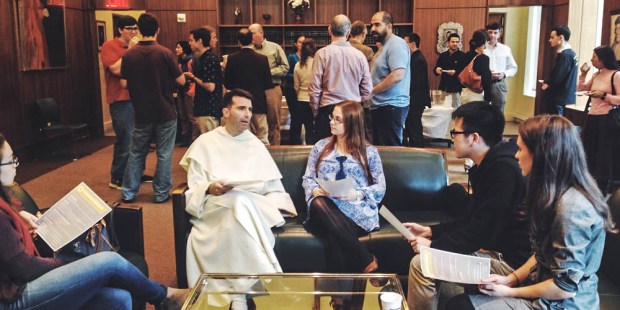 Campus radicalism might be making headlines, but this apostolate is bringing radical ideas to academia.

While news about campus radicalism gets lots of headlines—think of the violent campus mobs that shut down conservative speakers last year—a 10-year-old effort to infuse Catholic thinking into some of America’s most prestigious universities has been growing steadily, and below the radar.

The Thomistic Institute—so named because of its connection with the Catholic religious order associated with the great philosopher Thomas Aquinas—is bringing speakers to 31 campuses, mostly in the United States, for free lectures on subjects like theology, philosophy, ethics and politics.

In its own words, the Institute “exists to promote Catholic truth in our contemporary world by strengthening the intellectual formation of Christians at universities, in the Church, and in the wider public square.”

It is also active in England and Ireland and has off-campus chapters for young adults in Washington, D.C., and London.

Based at the Dominican House of Studies in Washington, D.C., the institute will sponsor 56 lectures and conferences this academic year, focusing on topics like original sin in literature, the legacy of Pope Benedict XVI, and bioethics.

Begun as a theology think tank, the institute soon discovered that “there’s tremendous interest coming from students and faculty at secular universities about what [the Thomistic] tradition is and what it has to offer,” said Fr. Dominic Legge, O.P., director. “We began to realize that the perspective that the Thomistic tradition offers is sometimes hard to find on contemporary campuses. And yet it has a lot to say to even the very existential questions students today have.”

Said Evelyn Flashner, a co-president of the TI chapter for Harvard University graduate students, “Our model is to offer lectures to grad students and other interested members of the community, and we bring in speakers who have expertise in areas that are not necessarily covered in the program at Harvard or the surrounding area. Typically, it’s a theologian, ethicist or philosopher. Topics very much vary—from faith and science to political philosophy. It’s designed to supplement the education of people within the community and also to give further education to Catholics in the community and provide a kind of intellectual space for a discussion of Catholic theology and philosophy for even non-Catholic members of the community.”

Flashner’s chapter will be hosting Supreme Court Justice Neil Gorsuch this weekend for a conference on “Christianity and the Common Good.” Recently, it gave the podium to speakers who explored a medieval saint’s writings for what they have to say about current controversies in the Church and what a 20th-century nun taught about feminism.

Fr. Legge explained that the talks that student chapters organize “are not directly political, and as a result they are not typically seen as threatening to the contemporary secular university, even though they are presenting ideas that are maybe not what you would normally find on a secular campus.”

Flashner, who is working on a doctorate in government at Harvard, said, “We generally skew towards more academic topics that aren’t usually hot button political issues, so the reaction has been more one of curiosity rather than reactionary and anger.”

The first TI event at Brown University “posed a classic question for medieval philosophy and theology: ‘Is theology a science?’” Fr. Legge recalled. “That’s a question that St. Thomas Aquinas and St. Bonaventure and almost every medieval philosopher and theologian addressed. Brown found it to be such an intriguingly strange question that they advertised the Thomistic Institute lecture on the main university web page, as the featured event of the week,” he said. “Now they might not have fully understood the meaning of the question. For St. Thomas Aquinas, to ask that question is to ask whether human reflection on what God has revealed can give us certain knowledge of the truth. That’s what he means by science—having scientific knowledge is certain knowledge of the truth, and his answer, of course, is yes, theology does give you that kind of knowledge. Theology is a science, and therefore theology does have a rightful place in the university curriculum. That’s a conversation very much worth having, but it doesn’t really fit into the political categories that would set off alarm bells on contemporary campuses.”

If the TI isn’t making click-bait headlines, it is having an effect in individual people’s lives: Fr. Legge told of several conversions and the awakening in some participants of a desire to serve God as a priest or nun. For Dan Gordon, who got involved in the TI chapter at Yale University while he was majoring in the humanities there, the lectures helped him make a decision to go on to study theology after graduation. Though he received a number of offers at other grad schools, he decided to attend the Dominican House of Studies.

The Thomistic Institute, Gordon said, “offers an account of topics of faith in a way that is set in a contemporary context, addressing contemporary philosophy and scientific questions. It takes the Catholic faith very seriously but it also takes the philosophic and scientific objections against that faith very seriously. I think there’s a need for that and a deep hunger for that because with very few exceptions you don’t get exposure to serious theological thought anywhere on campus. At Yale there are very few opportunities for a Catholic to explore his or her faith in an intellectually serious way. There are some exceptions. But there are really only a handful of courses where you can do this, and they tend to be at the Divinity School and they tend to be the minority of courses.”

In Washington, D.C., Evelyn Blacklock, a young lawyer, and her team organize lectures that appeal to both the public policy interests of attendees in the District and the more theological yearnings of Catholic young adults in northern Virginia. Blacklock’s group is one of a few non-campus-based chapters of the TI.

“We sensed that there was an appetite for something a little out of the ordinary D.C. fare, so we organized a series on ‘Original Sin and Literature,'” Blacklock said. “We’re trying to get professors who teach literature, and they’re choosing an author to give a talk on themes of sin and redemption in each of those author’s works: Dostoevsky, T.S. Eliot, Walker Percy.”

Said Fr. Legge, “We’re really trying to empower the students on these campuses [and in young adult groups] to discover the riches of the Catholic intellectual tradition and expose their campus to some of these ideas.”

On some college campuses, that can be really radical.

Note: The Thomistic Institute website has an archive of recordings of presentations that have been made at its various university chapters.