Was St. Jude the one getting married in Cana? 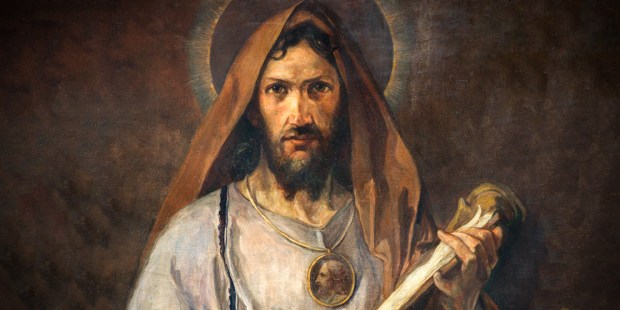 And how did he become the patron of impossible causes anyway?

We know that Jesus went to a wedding feast at Cana and turned water to wine. We know that his Mother was also there, as were his “brothers.” John does not, however, tell us, who was getting married, but the involvement of both Mary and Jesus in the wedding makes it likely that the bridegroom was a close friend or relative.

According to Nicephorus Callistus, a 14th-century Greek scholar of Church history, the bridegroom at the wedding of Cana may well have been St. Jude the Apostle. Callistus’ work was based heavily on no-longer-extant works, so it’s likely that he drew from sources and reasoning no longer available to us in reaching this conclusion. Ultimately that means “we just don’t know,” but it is certainly interesting to think about.

Whether or not Jude was the bridegroom at Cana, Scripture tells us he was one of the Lord’s “brethren” (cf. Mt 13:55) and  an apostle. And he is a revered saint of the Church. His feast (October 28) is soon approaching. We won’t hear of him, or Simon the apostle whom we celebrate the same day, during the liturgy this year because their feast falls on a Sunday, and the Sunday readings and prayers take precedent.

The second to last book of the Bible – the Epistle of Jude – is attributed to St. Jude. He is also one of the Apostles directly quoted in the Gospels themselves: “Judas, not the Iscariot, said to him, ‘Master, what happened that you will reveal yourself to us and not to the world?’ Jesus answered and said to him, ‘Whoever loves me will keep my word, and my Father will love him, and we will come to him and make our dwelling in him’” (John 14:22-23).

Read more:
If the Holy Spirit is your teacher, here is his textbook

After the death of Jesus, St. Jude began preaching the good news in Judea, but soon found his way to foreign lands. He is said to have been in Iraq as early as the year 37, assisting the local Mesopotamian Church community that St. Thomas the Apostle had recently started. He also helped found the Armenian Church, and evangelized Libya, Turkey, and Persia (modern day Iran). St. Simon is believed to have joined up with Jude in Iraq, remained with him throughout his travels and been martyred with him in Lebanon around 65. Their remains have been laid to rest together in St. Peter’s Basilica.

St. Jude is perhaps best known in the western Church as patron saint of lost causes. According to one tradition, he came to be known as such because he shares a name with Judas Iscariot. Legend has it that people abhorred saying the name “Jude” due to its association with Judas Iscariot and, as a result, few people invoked St. Jude Thaddeus, the Apostle. If someone did, it was a sign that they were desperate, and St. Jude, who had stored up lots of graces that weren’t being called upon, was therefore very generous with his intercession in desperate cases. An alternative suggestion is that he intercedes in desperate cases because he himself braved many difficult situations and is therefore positioned to help others do the same.

St. Jude might be one and the same as Jude of Edessa, also known as Addai. Jude of Edessa shares more than a name with Jude Thaddeus: he was also called “Addai” (an Aramaic derivative of Thaddeus), also played a role in the early Church community in Iraq, and was referred to as “one of the 72.” These similarities strongly point to the probability of the two being the same person, although this has not been definitively proven. Addai, or Thaddeus of Edessa, is strongly associated with the Chaldean Catholic Church and Assyrian Church of the East, and is thought to be the origin of one of the most ancient Eucharistic Prayers: the anaphora of Addai and Mari, a version of which is still used today by the Chaldeans.