Jesuit plantation among sites discovered on Navy lands in Maryland

Items found include a cilice, or penance belt, and relics of slave life.

A 17th-century plantation founded by Jesuits is among the many discoveries made on land occupied by the United States Navy in Maryland. 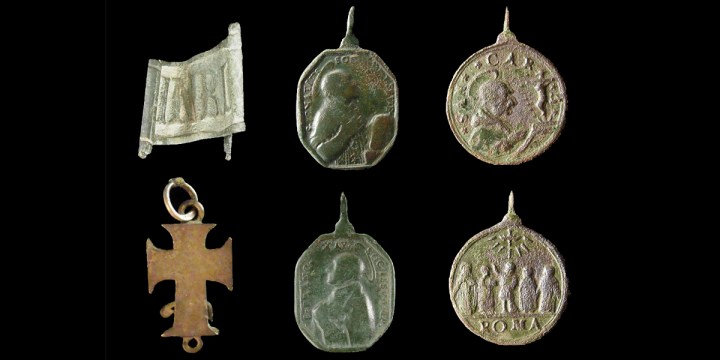 Naval Air Station Patuxent River sits on a peninsula where the Patuxent River and Chesapeake Bay meet. Approximately 65 miles south of Washington, D.C., the 14,500-acre complex includes the main station in Lexington Park, Webster Outlying Field in St. Inigoes, Navy Recreation Center Solomons in Calvert County, and Bloodsworth Island Range in the Chesapeake Bay. As Sara Rivers Cofield, archaeologist and curator of federal collections at the Maryland Archaeological Conservation (MAC) Laboratory, located at Jefferson Patterson Park and Museum, the State Museum of Archaeology, pointed out, people have always settled close to water, so this area has been rich in archaeological discoveries over the past decades.

The oldest artifacts discovered are stone tools dating back 10,000 years.

“The oldest site that has had in-depth excavations is a tool-making and hunting camp at NAS Pax River that dates back to the late Middle Archaic and early Late Archaic period, about 7,000 to 4,500 years ago,” Rivers Cofield said. “It was excavated to recover data before a helipad site was constructed.”

Archaeologists have worked for several years to corroborate records of a Jesuit plantation, dating to about 1637, at Webster Field, near St. Mary’s River. Remnants of the St. Inigoes House on the Jesuit plantation were first discovered in the year 2000, after nearly 20 years of searching along a riverside in St. Inigoes.

According to a Baltimore Sun report at that time, historians say the Jesuits arrived with the first English settlers in 1634, aboard the Ark and the Dove, and built their first chapel in St. Mary’s City. By 1638, they were harvesting tobacco and corn at St. Inigoes to finance their mission to convert and educate Native Americans and colonists. Items discovered include Native American tobacco pipes, and ammunition .

Three years ago ,  research fellow Laura Masur re-examined some of the collections and determined that what had been thought to be art of bedsrings was actually part of a cilice—a spiked, metal garter or belt used in some Catholic acetic traditions, worn in order to do penance.

By bringing about 40 indentured servants to the colony in the 1630s, the Society of Jesus, or Jesuits, acquired rights to 2,000 acres at Priests Point from Cecil Calvert, the second Lord Baltimore and Catholic proprietor of the colony. Perhaps half of those first servants worked at St. Inigoes House, supervised by four or five Jesuit fathers, Miller said. The farm was one of several large Maryland plantations established by the Jesuits. “The farming financially supported their missionary efforts. This plantation was for growing tobacco and making money,” said Edward E. Chaney, state archaeologist for Southern Maryland. The Jesuit fields were worked first by servants, after the 1660s by slaves and finally by tenant farmers.

The slaves were freed before the Civil War, but the Jesuits held on to their land at Priest Point until 1942, when they sold 800 of the 2,000 acres to the U.S. War Department, the report said. The Navy established Webster Field in 1943.

Another site discovered at NAS Pax River is Susquehanna, a plantation owned by various members of the well-known Carroll family in the 18th and 19th centuries. The family was related  , through Captain Henry Carroll, to Charles Carroll, the only Catholic signer of the Declaration of Independence, and John Carroll, who became America’s first Catholic bishop.

Excavations in the 1980s revealed the presence of a house believed to have been built in the 1840s. Old maps from the time showed a number of small buildings nearby, thought to have been occupied by slaves.

When archaeologists excavated on the site of those outbuildings in 2015, they found what’s known as a gizzard stone, believed to have held spiritual/mystical significance. Also discovered was a fragment of a small bottle with the words “Hoyt’s Nickel Cologne” in raised letters. “The cologne was supposedly used for luck in love and gambling, and was very popular in the late 1800s in African American communities,” according to a publication serving the Naval Air Station.

The publication suggested that it was fortunate that the land involved is owned by the U.S. Navy, as federal preservation laws dictate that any archaeological discoveries found on federal land be preserved, laws that do not apply to private developers.

Tours of the MAC Lab are available at 11 a.m. and 1 p.m. every Thursday and at 1 p.m. on the first Friday of each month; and access is offered by appointment to anyone interested in the collection.