Will a Caravaggio Nativity painting, stolen 50 years ago, finally be returned? 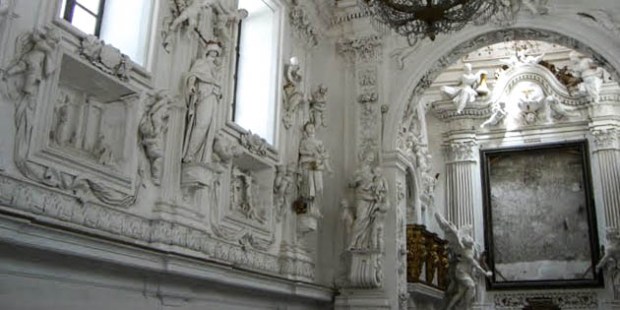 Several Mafia turncoats have testified about its fate. Will the latest one lead to its restoration?

When thieves stole a Caravaggio altar painting of the Nativity almost 50 years ago, they left the wooden frame on which the painting had hung since the 17th century. Since the heist, that frame has hung in a chapel next to the oratory in Palermo from which the Caravoggio was snatched.

Now, some hope, the frame may soon receive back the treasured painting, as the wooden manger in Bethlehem received the Christ Child the painting depicts.

The theft, carried out on a stormy night on October 17, 1969, at the Oratory of San Lorenzo in Palermo, has been one of the biggest mysteries of the art world. It remains No. 2 on the F.B.I.’s list of the top-10 art crimes, after Iraqi looted and stolen artifacts.

Jonathan Jones writes in the Guardian that Michelangelo Merisi da Caravaggio’s Nativity may be about to resurface.

“Earlier this year, Rosy Bindi, president of Italy’s parliamentary Antimafia Commission, announced a major breakthrough in the case,” Jones writes. “New testimony from some inside the Sicilian mafia has led investigators to believe the Nativity can be recovered, and soon. They have followed leads to Switzerland and—it emerged in the autumn—to eastern Europe.”

Many experts are skeptical, however, questioning whether the testimony of turncoat members of Cosa Nostra—known in Italian as pentiti—can be trusted.

Indeed, over the years, various such inside sources have claimed some pretty far-fetched things: the painting—known as the Nativity with Saints Lawrence and Francis—had been burned in a fire. Another said it had been hidden in a barn and eaten by mice or pigs. Someone else said it was unveiled during Mafia boss summits.

Among those doubting that the Mafia pulled off the heist is Bernardo Tortorici di Raffadali, president of Friends of Sicilian Museums, who was instrumental in commissioning a replica of the Caravaggio.

“To steal that painting, which is three by two metres, between all of Serpotta’s stucco, you had to plan it and study,” he said. “The cut didn’t leave an inch of paint, so it is perfect.”

He believes it was taken by professional art thieves, with the Mafia only marginally involved. “If it is professional, it has been studied, and must have been commissioned.”

But in May of last year, another turncoat, Gaetano Grado, testified to the Antimafia Commission, giving investigators renewed hope. As the New York Times told it in June:

According to this account, two days after the painting was taken, Gaetano Badalamenti, then one of the top Sicilian mobsters, asked Mr. Grado, who at the time was the Mafia member in charge of downtown Palermo, to look into the theft of the Caravaggio. The turncoat said that he tracked down the thieves, and that the painting, after passing through the hands of several mobsters, had eventually ended up with Mr. Badalamenti. (Mr. Badalamenti spent his last 17 years in a federal prison in the United States as one of the leaders of the so-called “pizza connection” drug trafficking ring. He died in 2004.)

Mr. Badalamenti invited a “very old” Swiss art dealer to see the Caravaggio, according to Mr. Grado. When the dealer laid eyes on it, he “sat and cried, and cried,” to the point that Mr. Badalamenti “thought he was stupid,” Mr. Grado recalled. Then the Swiss man announced that he would cut it into pieces because it would not sell otherwise. The dealer, who is not named in the evidence that has been made public, has since died, commission officials said.

Mr. Grado’s account checked out on various fronts. “He’s the first turncoat with a direct connection to the theft,” Francesco Comparone, the commission’s top councilor, said.

On Wednesday, Ms. Bindi said: “If you find the right thread, then everything follows. It’s clear that Grado was that thread.”

Although Tortorici di Raffadali doubts the new evidence, he’s happy that “now they start to believe that Caravaggio is still alive, somewhere.” Art detective Charles Hill thinks “it’s likely to be a cadaver of a painting, but I believe it still exists.”