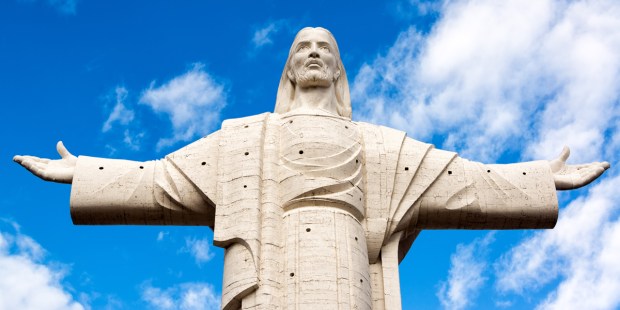 Shutterstock
The current record holder for largest statue of Jesus Christ in the world is the Cristo de la Concordia in Cochabamba, Bolivia
Share
Print
J-P Mauro - published on 01/02/19

The new statue will be nearly twice as tall as the current record holder.

What will be the world’s tallest statue of Jesus Christ is set to start construction in Mexico early this year. The project will dwarf the current record holder — the Cristo de la Concordia, in Bolivia, which stands just over 40 meters tall — by nearly twice its height. Cristo de la Paz (Christ of Peace) will stretch towards the sky, towering at 77 meters over the Mexican state of Tamaulipas, one of the most dangerous states in the nation.

The project was imagined and organized by Eduardo Verástegui Córdoba, a Mexican actor who is native to Tamaulipas. Mexico News Daily reports that Verástegui said the purpose of the project is to leave a legacy of peace for the state in which he was born. The statue will show Christ’s arms outspread, as if offering a supportive hug.

The construction will be conducted by Fernando Romero, whose firm designed the Mexico City airport, atop an expansive esplanade large enough to accommodate a crowd of 10,000 people.

Developers hope to turn the area into a thriving hot spot for pilgrims and tourists, who will be able to take advantage of the many facilities and services to come, including a church, restaurants, stores, a convention center, a shelter for pilgrims, a hotel, an amphitheater, a handicrafts market, funicular and cable car stations and a residential area.

Verástegui said he planned to travel to Rome to present his project to Pope Francis. While no details have been released in reference to the cost or funding of the project, the Catholic Church said construction should commence in early 2019.

Promoters of the statue were quoted saying that the Christ of Peace would represent “a message of faith, love, hope and peace.”