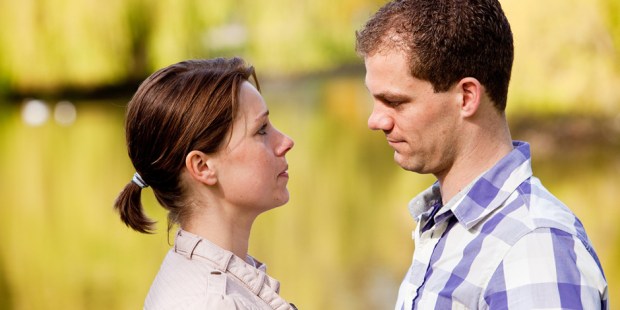 These 5 words might be the most helpful for the future of your relationship.

I’ll never forget one of my first fights with my now husband. It was evening, and we had just gotten engaged. (Granted, I don’t remember what we were fighting about now, just how it went down.)

“Aren’t you going to say anything?” he asked.

I looked at him and said, angrily, “I don’t know what to say.”

I think there were a few seconds of frustrated staring and then he uttered what would become the most helpful five words for the future of our relationship. He grabbed my laptop, handed it to me and said, “Well, can you write it?”

I opened an email draft and started typing. I discovered that yes, actually. Yes, I could write about it. He left the room to let me type out my thoughts and as I typed, I discovered what I felt and what I wanted to say.

Going forward we used this approach to fighting when we got to an impasse. He’d say his piece and then give me space to write mine. Then we’d reconvene, and I’d be able to articulate my thoughts. And then we’d actually be able to work things out (or at least get to the point where we were both actively listening to the other person).

This started a good pattern for us in several ways: First, it gave me a practical tool to use to fight my tendency to just get angry and silent, stewing in frustration. Second, it helped my fiance learn patience and creativity in dealing with someone who processes things the opposite way he does. And third, it gave us both a skill to use elsewhere. Because we loved each other and wanted to spend the rest of our lives together, we both put in the work to help our disagreements and fights become more fruitful. I can now take that skill into my relationships with other people (whether I have a lifelong relationship with them or not) who handle confrontation differently from me.

As time has gone on, I’ve become better at articulating my side of things immediately, and my processing time has shortened. But there are still times, especially when I instigate a discussion, that I sit down and write out a few things first to help me organize my thoughts.

Perhaps you do not struggle with verbalizing your emotions and you process your feelings and thoughts clearly and quickly. But, I would imagine that someone in your life does have trouble with this — a friend, family member, child, coworker. If that’s the case, suggest to them that they write down what they’re feeling when you come to an impasse.

This writing trick also works for specific situations when you don’t think you’ll be able to stay calm and collected in a normal face to face conversation. Writing a letter to the person you want to confront, either as a way to start a conversation or as a way to prepare for a conversation you need to have, is incredibly helpful.

When you’re dating someone, confrontation can be intimidating because it threatens the foundation of the relationship and causes anxiety about the future. Learning to navigate confrontation and fight in a healthy usually involves a learning curve, and will vary a little bit from couple to couple. That said, give yourself time and some patience as you figure out how to fight well with someone you love.

I’m still not the best verbal communicator in the world. And, I probably never will be. But after getting into the habit of verbalizing my frustrations, and being in a relationship with someone who patiently helps me get there, I’m getting better.

Read more:
The 6 stages of a relationship: Which one are you in?

Read more:
3 Sins we commit when we communicate