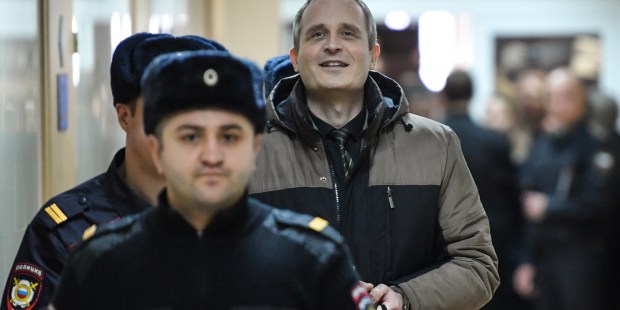 Mladen ANTONOV / AFP
Dennis Christensen, a Danish Jehovah's Witness accused of extremism, is escorted into a courtroom to hear his verdict in the town of Oryol on February 6, 2019. (Photo by Mladen ANTONOV / AFP)
Share
Print
John Burger - published on 02/06/19

A foreigner living in Russia has received a six-year prison sentence for organizing the activities of a banned extremist organization, Reuters reported.

That extremist organization? The Jehovah’s Witnesses.

Dennis Christensen, a 46-year-old builder, was arrested in May 2017 at a prayer meeting in Oryol, about 200 miles south of Moscow after a court in the region outlawed the local Jehovah’s Witnesses a year earlier, said Reuters:

Russia’s Supreme Court later ruled the group was an “extremist” organization and ordered it to disband nationwide, and Christiansen’s detention, the first extremism-related arrest of a Jehovah’s Witness in Russia, foreshadowed dozens of similar cases. …

Christiansen had pleaded not guilty, saying he had only been practicing his religion, something he said was legal according to the Russian constitution which guarantees the right to practice any or no religion.

The man’s lawyer, Anton Bogdanov, said he planned to appeal the verdict, which he described as an illegal decision and part of Russia’s fight against religious freedom.

Forum 18, an organization that monitors religious freedom issues, said that Russian laws restricting freedom of religion and belief have increased, as have prosecutions of people exercising this freedom. “Given intensifying official hostility to independent public activities without state permission, freedom of religion and belief and interlinked human rights may in future be increasingly restricted,” the organization said.

The New York Times earlier painted a picture of the situation:

The Russian court ruling, which put Bible-reading Christians who reject all violence in the same category of extremism as supporters of the Islamic State, set off a harsh crackdown across Russia. The Jehovah’s Witness headquarters near St. Petersburg were seized by the state, prayer halls around the country were raided by the police and scores of believers were arrested.

Some publications of the Jehovah’s Witnesses are also on a list of banned extremist literature.

Reuters interviewed Christensen in his jail cell during breaks in the trial. “I’m afraid that history is now repeating itself,” he said “I’m afraid that it’s actually like Stalin has come back.” The wire service provided some background:

The atheist Soviet Union regarded Jehovah’s Witnesses as anti-Soviet because of their refusal to serve in the army. Under Stalin, hundreds of their leaders were jailed and thousands were deported to Siberia in 1951 after much of their property was confiscated.