One of the founders of the Silvermine artists community saw art and faith intimately connected.

It’s difficult to imagine anyone having a clearer idea of what his calling in life is than something the artist Carl Schmitt wrote.

“My philosophy may be summed up thus: First, to receive from God gratefully everything possible that I can get. Second, to give back to God through my neighbor everything which I can give. To give gifts to my neighbor I must use art, because a gift must be made—hence I must be an artist,” Schmitt penned in 1933. 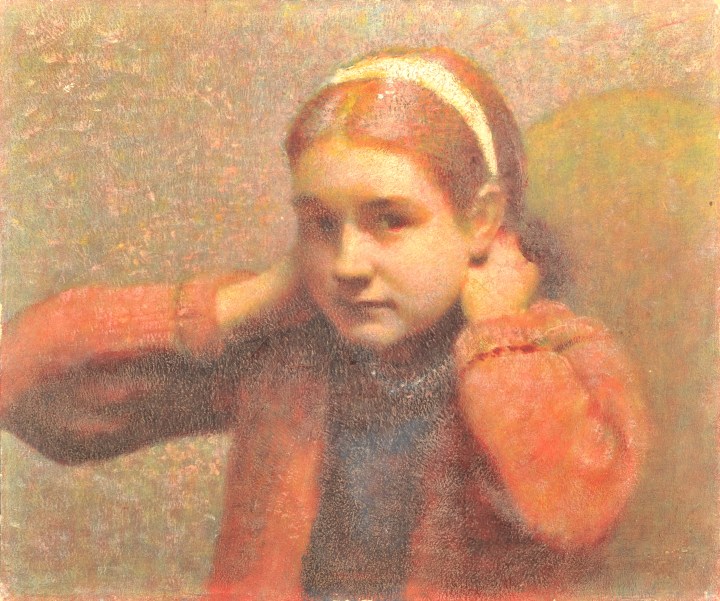 By that time, the 44-year-old painter already had been well-immersed in his craft for about three decades. He had also begun the practice of keeping detailed notes in journals, with his observations on art and life and musings about the religious nature of his artistic vocation.

The corpus of work, which includes hundreds of paintings, drawings, pastels, watercolors and thousands of pages of writing, form the basis of the Carl Schmitt Foundation, based in the heart of the Silvermine community in southwestern Connecticut. Schmitt was a founding member of the Silvermine Guild of Artists.

Samuel A. Schmitt, the artist’s grandson and president of the foundation, said there are plans for exhibitions and lectures at what was once Schmitt’s home and studios. The younger Schmitt is also writing a biography of his grandfather and maintains a blog featuring the artist’s thought.

Schmitt used a painstaking method of layering and scraping to create a unique effect in his oil paintings. He would do multiple underpaintings in various colors and then scrape away to reveal those colors in the combinations he needed in order to create certain color patterns.

Standing in front of a portrait of one of Schmitt’s sons playing the cello, Samuel Schmitt pointed to the boy’s knee as an example of the technique, and marveled at the depth of the colors.

“It’s almost kaleidoscopic,” he said. “That’s from the layers.”

The technique was not entirely original, the younger Schmitt admitted. “It was inspired by a lot of the Renaissance Masters, who did sort of an underpainting in a neutral color, like a burnt sienna or kind of a brown,” he said. But while the older painters did the modeling and the forms and the layout of the painting and then the colors, Schmitt would “build the form with the color.”

And he worked over the years on what colors would come in which order. “He would sometimes spend months on a painting,” said Schmitt, “but not so much the portraits. That’s probably one of the reasons why he did a lot of still lifes, because the still life wasn’t going anywhere.”

Born in Ohio in 1889, Schmitt’s early signs of talent won him the support of a patron to study at the National Academy of Design in New York. As a young man striking out his way in the New York art world, he learned about a quiet place about an hour away by train: Silvermine. He fell in love with the place and spent pretty much the rest of his 100 years there, except for a few excursions to Europe. He also met and married the daughter of a local artist who had already made a name for himself as a New York architect. Schmitt and Gertrude Lord went on to have 10 children, all but one of them, Gertrude, boys.

“He came from a generation of artists who, in a way, were sort of a lost generation, you could say, between the Late Impressionists and the more modern movements coming in in the 1920s and ’30s,” Samuel Schmitt said. “It was a little bit of a generation where it was kind of finding its way in terms of artistic expression.”

He was still in New York when the 1913 Armory Show was mounted—the first major show to feature European modernists, such as Pablo Picasso and Marc Chagall.

“At that time it was basically panned by most of the American critics; they thought it was ridiculous,” Schmitt said. “My grandfather thought not quite ridiculous, but this just wasn’t the way he wanted to go, certainly.”

A devout Catholic, Schmitt often used his notebooks to reflect on what he was doing and muse about the relationship of his artistic work to his faith and his family and the role of the artist in society.

“He saw art as part of a larger picture. For a lot of artists, art is life, art is religion, art is everything, sort of the be-all and end-all, and he didn’t see it that way,” said Schmitt. “He really thought about how art fits into life and into the faith and into society and into history.”

It’s clear to Schmitt that his grandfather’s sacramental life informed his art, but he wrote about this in an indirect way. “He would say, for instance, the reason why the Middle Ages were such a rich period for art was that the Blessed Sacrament was honored,” Schmitt said. “Or, for instance, in his journal, all that he would write for Sunday was that he went to Mass and Communion. Just little hints here and there that he really took the sacramental life seriously.”

“He saw art as a sort of natural religion,” he continued. “He says it’s not religion in the sense that we’re worshiping the gods or we’re worshiping art or something, but it’s an understanding of God’s creation on a natural plane, which he said is really necessary for any sort of supernatural religion. You can’t have a supernatural religion that’s floating. It’s almost like I believe in these things up here, and there’s no connection with the stuff down here. They have to be integrated, and one of the points of that integration is art.”

The studios can be visited by appointment. The foundation’s website has more information.