Despite protests at his ordination, he was America’s first black bishop of the 20th century 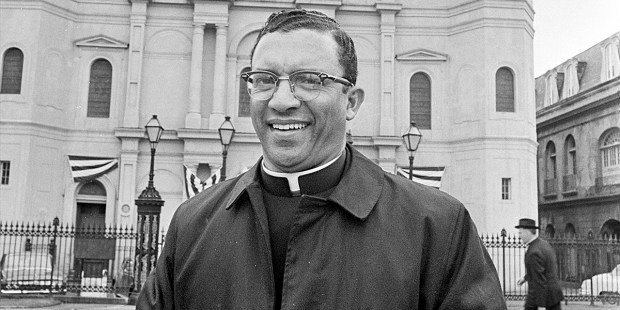 “I feel that the greatest contribution I can make to raise the dignity of my people is being a good religious bishop.”

Harold Robert Perry was born in Lake Charles, Louisiana, in 1916. He was the oldest of six children born to Frank Perry, a rice mill worker, and his wife, Josephine, a domestic cook. The Perry children grew up Catholic in the French-Creole region. Their parents taught them to be tolerant of others and also taught them not to harbor hatred against white people despite the racism they experienced.

As a young boy Harold had a deep desire to enter the priesthood. At the age of 13, he was able to enter the seminary of the Society of the Divine Word, located in Bay St. Louis, Mississippi. The order, founded in 1875 in Holland, had formed priests in several countries. He completed his studies between locations in Illinois and Wisconsin and was ordained to the priesthood in 1944. He was the 26th black priest ordained in the United States.

Father Perry spent the next several years serving as a parish priest in different parishes that served large African-American populations across Louisiana, Mississippi, and Arkansas. At the time, the Archdiocese of New Orleans was the largest Catholic diocese in the United States. But considering there were 45 million Catholics nationwide, there were only 700,000 who were African-American. It was during this time that Father Perry began to get involved in the Civil Rights Movement.

A group of white Catholics of the region were gaining notoriety because of their objections to integration. Even parochial schools were segregated. When an African-American priest was assigned to one Louisiana church, half the members refused to attend, and the archbishop forced them to integrate. It was 1962, and this resulted in the excommunication of the three most vocal and violent protesters.

In 1963, having gained some prominence as a Catholic civil rights leader, Father Perry was among those invited to the White House by President Kennedy to discuss peaceful desegregation. He was then appointed as the Provincial Superior of the Divine Word Society in the United States. In 1964, he became the first African-American clergyman to deliver the opening prayer in Congress.

In September of 1965, Father Perry traveled to Rome to attend the consecration of Father Carlos Lewis, a black priest from Panama, as a bishop. It was at this time that he was informed that Pope Paul VI was going to appoint him as auxiliary bishop to the Archbishop of  New Orleans. A short time later he met with the Holy Father. That day was also his 49th birthday.

His appointment was met with much fanfare and civic and religious leaders, including President Lyndon Johnson, sent their congratulations. Archbishop Egidio Vagnozzi, the apostolic delegate to the United States, is quoted as saying at Bishop Perry’s episcopal ordination, “the consecration of Bishop Perry was not an honor bestowed upon the Negro race, so much as it was a contribution of the Negro people to the Catholic Church.”

The president of the New Orleans Interdenominational Ministerial Alliance told America magazine that Bishop Perry’s elevation “places the Archdiocese of New Orleans in the 21st century, evidence that the ground before Christ’s cross is level and that all are equally redeemed.”

In 1966, amidst loud racial demonstrations outside, Harold Robert Perry was consecrated a bishop of the Roman Catholic Church. One demonstrator screamed, “This is another reason why God will destroy the Vatican.”

Bishop Perry recognized the scope of his role when African-Americans were finding their voice after decades of social prejudice. He told a reporter from Ebony magazine, “My appointment is a religious one, not a civil rights appointment. My religious work comes first. … I feel that the greatest contribution I can make to raise the dignity of my people is being a good religious bishop and fulfilling my office to the utmost of my ability.”

Bishop Robert Perry died on July 17, 1991, at the age of 74. He is hailed as the first African-American to serve as a Catholic bishop in the 20th century

Note: The first bishop in the United States of known partial African descent was Bishop James Healy (1830 to 1900). His father was an Irish immigrant, and his mother was of mixed race. Throughout his life, however, Bishop Healy was perceived as a white Irish American.

Read more:
This patron of African-Americans knew the sting of prejudice, but weathered it with grace