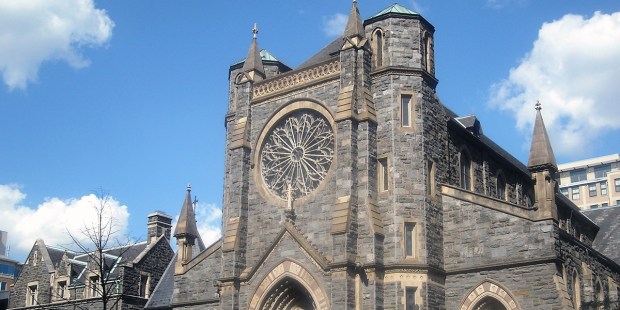 Set up for Irish laborers building the White House, the parishes has hosted presidents and even a pope.

If you find yourself wandering around Washington, D.C., between the White House and the Smithsonian and the Capitol, you might stumble upon an old and pretty Catholic church named St. Patrick’s. If you like what you see, you have Irish immigrants to thank for it.

St. Patrick’s is the oldest Catholic parish in Washington. In fact, according to the parish website, it was the first church of any denomination erected in the Federal City, i.e., the city of Washington.

In the years before the new nation moved its capital out of New York City, it had a lot of work to do get Washington ready to become the capital. Irish stonemasons worked on the White House and the Capitol building, and in 1794, a Dominican priest newly arrived from Dublin, Fr. Anthony Caffry, saw that the growing cohort needed spiritual attention. At first, Fr. Caffry held Mass in rented space for the men and their families, but he soon bought a plot of land to build the church, named in honor of Ireland’s patron saint.

Succeeding Fr. Caffry in 1804 was Fr. William Matthews, the first American to be ordained a priest in the United States. Nowadays, pastors usually serve a parish for no more than a dozen years, so it might surprise us to learn that Matthews led St. Patrick’s for 50 years. He might very well be the model for that old aphorism: “If you want something done, ask a busy man.” Besides pastoring the parish, he was president of Georgetown University, Administrator of the Philadelphia Diocese, co-founder of the D.C. Public Library, a long-time member of the D.C. Public School Board, and founder or promoter of innumerable institutions (Gonzaga College, Visitation Convent, and St. Vincent’s Orphan Asylum among them).

He also found time to build a new St. Patrick’s church, supposedly designed by a parishioner, James Hoban, who was the architect of the White House. The parish website relates:

Soon after, the church was the scene in 1814 of British soldiers attending Sunday Mass when they invaded the capital and burned its public buildings. Eventually the brick church was embellished with the city’s first pipe organ, a gift pulpit from Emperor Dom Pedro I of Brazil and a painting from Charles X of France.

The 1850s, when Ireland was facing famine and Europe upheaval, brought new waves of immigrants to America, and to the parish. During the Civil War, Washington saw a great influx of soldiers, and no doubt the parish helped tend to their spiritual needs.

Everyone knows the name John Wilkes Booth, the man who assassinated President Abraham Lincoln. But a parishioner of St. Patrick’s, Mary Surratt, was charged as an accomplice of the murder, which took place at Ford’s Theater, just two blocks away. Fr. Jacob Walter, pastor at the time, was outspoken in the defense of Mary Surratt, but she was convicted of complicity. Fr. Walter stood beside her on the gallows at her execution.

Fr. Walter oversaw the construction of a new church, the present granite edifice. The Gothic-style church became the venue for national and international events, most notably the First National Eucharistic Congress in 1895.

In the early 20th century, a pastor named Fr. Denis Stafford gained notoriety as an orator, famous for his recitation of Shakespeare. When he built a new rectory and school building, even President Theodore Roosevelt came for the dedication. He was not the last president to grace the church grounds. Presidents William Howard Taft and Woodrow Wilson, and much later Lyndon B. Johnson, attended the annual Pan-American Mass, which Monsignor William Russell initiated to promote relations among the American Republics.

Relations with the community were even more important, as evidenced by the outreach during the deadly flu epidemic in 1918. Because of the Great Depression, a professional Catholic Charities Organization emerged under Monsignor Cornelius Thomas’ prompting. (Years later, in 2001, a school that operated for several years on parish property was re-dedicated as the James Cardinal Hickey Center, the downtown home for Catholic Charities.)

In 1934, a young assistant pastor, Fr. Thomas Dade, initiated the Catholic Police and Firemen’s Society, and St. Patrick’s started an annual tradition to offer Mass for these public servants. Originally held each year on September 29, the feast of St. Michael the Archangel, patron saint of police and firefighters, Washington’s Blue Mass is now held in May, during National Police Week. The current pastor, Monsignor Salvatore A. Criscuolo, serves as their chaplain.

Soon after the Japanese attack on Pearl Harbor and the United States’ entry into the Second World War, Fr. Dade opened a Catholic USO Club. Throughout the war, thousands of servicemen and women were fed and entertained by dance bands playing in shifts.

Postwar, the parish became a center of evangelistic activity, with the Venerable Fulton Sheen, among others, giving “convert classes” there.

The parish has had its share of dignitaries visit its facilities. Some, such as Catholic members of Congress, like John McCormick and Thomas “Tip” O’Neill, have worshiped here. But in 2015, one very special visitor capped more than 200 years of parish history. Worked into a busy schedule on an apostolic journey that included Cuba, the United States and the United Nations headquarters, St. Patrick’s Charitable Center hosted Pope Francis on September 24. The Pope had just addressed a joint session of Congress, but wanted to meet with homeless people at the church. Catholic Charities’ St. Maria’s Meals, which offers three weekly food programs, set up 55 tables for the poor and homeless to have lunch as the pontiff greeted clients.

“How good it is for us to pray together,” the pope told the gathering. “How good it is to encounter one another in this place where we see one another as brothers and sisters, where we realize that we need one another. Today I want to pray with you, I want to join with you, because I need your support, your closeness. I would like to invite you to pray together, for one another, with one another. That way we can keep helping one another to experience with joy that Jesus is in our midst, and that Jesus helps us to find solutions to the injustices which he himself already experienced, not having a home.”

For generations of Washingtonians, St. Patrick’s has been a home—a spiritual home—and will be well into the future.