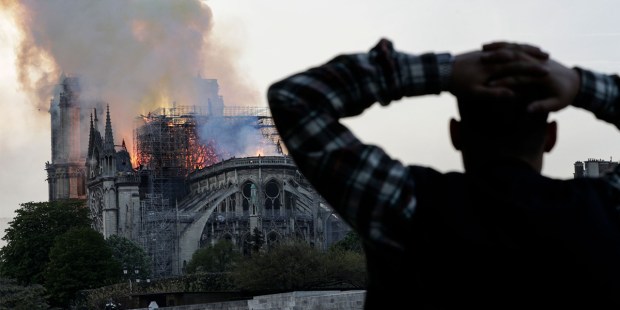 The crown of thorns, one of the nails used in the crucifixion of Christ, and a fragment of the Cross were saved from the flames.

The entire structure of the great Lady of Paris was a work of art in itself: it’s Gothic style, it’s beautiful rose windows, the gargoyles, it’s imposing organ, and the other works of art and sculptures inside and outside the church.

However, Catholics around the world were especially concerned about the three relics of Christ that were kept in the cathedral among its treasures, and which are especially in our hearts and minds during Holy Week: the crown of thorns, one of the nails with which Christ was crucified, and a small piece of the Lord’s cross on Calvary.

Read more:
These artifacts are said to be the relics of Christ

Although the relics of the Saints are highly prized, relics of Jesus Christ are the most important for us as Christians, particularly because the ones we have are the instruments of his Passion.

The “good news” within this tragedy is that both the relics and majority of the works of art from the cathedral are safe (ironically, yesterday, April 15th, was also the world day of art), including the famous statues of the 12 apostles on the facade, and the gargoyles, since they had been removed from the cathedral last week as part of a process of restoration that was ongoing.

The tunic of King St. Louis IX, also kept in of the treasury, is safe as well. St. Louis was the last European monarch to lead the Crusade to recover Jerusalem, and he managed to save various religious treasures from the Holy Land in the 13th century.

The crown of thorns passed through various hands before reaching the French monarchy. Louis IX built Sainte Chapelle in the 13th century as a place to house the relic for the veneration of the faithful, at close walking distance from the Cathedral of Notre Dame. During the French Revolution, the relic was kept in the National Library; it finally arrived at Notre Dame in 1801. It’s kept in a circular crystal tube, and nowadays it is without its thorns, because they were broken off and distributed to various churches (two of them are found at the Saint Peter’s Basilica in Rome).

The nail came from the Holy Sepulchre, and according to historical accounts, some Christians in Jerusalem gave it to the emperor Charlemagne in the year 799.

These relics of Christ are not usually on view for tourists, but the crown is exhibited for the faithful in Paris on the first Friday of each month at 3 p.m., the hour when Christ died, and on Good Friday for a longer period of time.

Clearly, this year will be different. It’s still unknown where these relics will be located while Notre Dame is rebuilt, and it hasn’t been announced whether or not they will be put on view at another church this Good Friday.

Father Fournier, chaplain of the firemen of Paris, is the one we have to thank for entering the cathedral in flames to save the crown of thorns and the Blessed Sacrament, risking his own life to save these iconic relics and this priceless treasure of our religion.