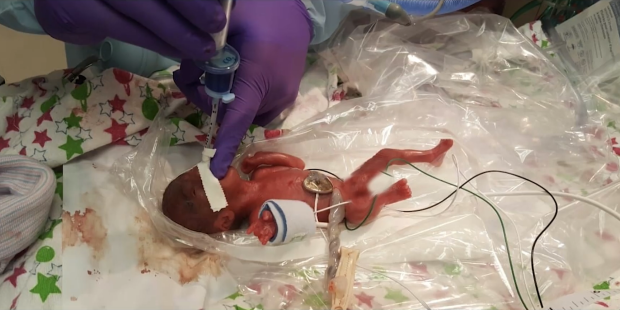 The first thing she did in this life was set a world record.

After five months of incubation, a girl believed to be the world’s tiniest surviving baby has been sent home from Sharp Mary Birch Hospital, in San Diego. Saybie, as the nursing staff nicknamed her, was born just 23 weeks into her gestation at only 8.6 ounces.

“She is a miracle, that’s for sure,” said Kim Norby, one of the nurses who cared for Saybie. Indeed, the chances of a premature baby surviving birth at 23 weeks is between 10% and 35%.

In a video released by the hospital, Saybie’s mother, who wished to remain anonymous, explains that her pregnancy developed a complication known as preeclampsia, which is potentially fatal to both mother and child.

“It was the scariest day of my life,” said Saybie’s mother, “I just felt very uncomfortable, and I thought, ‘Maybe this was part of the pregnancy.'”

Saybie was born in an emergency Caesarian section and was initially only expected to live for an hour. Her mother and father treasured every moment with their newborn, thinking each second could be her last, but as her mother tells it:

“She is the smallest baby,” the mother said. “But she’s mine.”

Dr. Edward Bell of the University of Iowa, which maintains the Tiniest Babies Registry, confirmed to NPR that Saybie is in fact the smallest surviving baby ever recorded. The previous “Tiniest baby” was born in Germany in 2015, weighing about 7 grams more than Saybie.

Dr. Bell commented, “Every life is a miracle — those that defy the odds even more so.”