Given the depth of thought that Leonardo placed into all his work, we can be sure of one thing: everything we see was done on purpose.

Five hundred years after the artist’s death, Leonardo da Vinci’s Last Supper has continued to inspire both believers and non-believers alike. The artwork seems to have tapped into in our collective consciousness. How so?

One of the least explored and under-acknowledged elements of the artwork is that it was painted on a wall. Painting on walls dates back to the beginnings of man, and references the most basic predilection of the human creative spirit: the desire to populate space with imagery. To adorn an open wall with images is to activate that space in some manner. Color infuses spirit and energy into a space, while shapes and representations of humans and animals inject it with a sense of life. 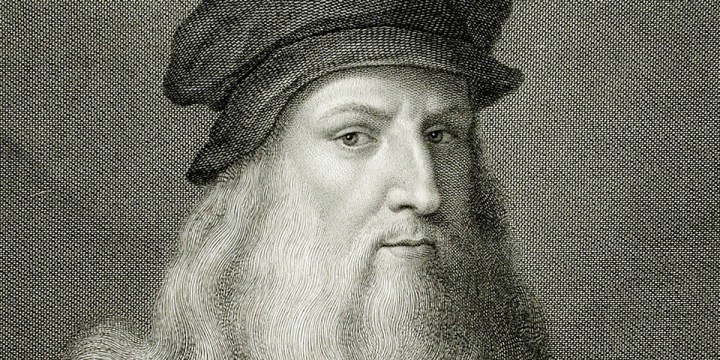 There is a fundamental connection between walls and culture. They can create a protective barrier surrounding a city or act as a structural component of a building, essential elements in the apparatus of civilized life. Religion has been foundational in creating the culture and institutions that have made the human “world” possible. As the history of art is overwhelming religious, the relationship between art, walls, and civilization is therefore profound. The Last Supper’s religious setting and political patronage place the artwork within this larger cultural framework.

The Last Supper event is primarily about the power of the spoken word. Christ’s announcement of the betrayal of one of his apostles is cataclysmic. The artist therefore needed to find a way to represent its explosive impact on the historic, emotive and metaphysical levels. Confronted with a flat, blank wall, Leonardo used the relatively new scientific technique of one-point perspective to visually break the spatial plane of the wall. Its use here speaks to the painting’s overarching Renaissance-era meaning associated with its usage, that science and reason leads one toward God.

When one views Leonardo’s fresco, its deep perspective creates a dramatic inward angle. Yet as much as the fresco draws the viewer in, there is an even stronger sense that it opens outward. Leonardo’s table is almost flush with the front of the painting’s pictorial surface. In fact, the top of the table spills outward, as if in real life the glasses and plates would slide off onto the floor of the dining hall. Also, the painted room’s architectural proportions abound with Pythagorean musical ratios (12:6:4:3). Scholars state that Leonardo organizes the fresco in “harmonic space,”and have identified a 40-second musical composition within the painting.

Musical elements with the painting

In terms of sound, these aural elements are not only an example of Renaissance classical rationality, but are also rhetorical. Just as Christ speaks to his disciples, the fresco’s outward facing energy acts as a sort of graphic “speaker,” visually projecting the visual “sounds” ensconced within the painting out into the dining hall. To the extent that the walled artwork does in fact “speak” to its viewers, what does it say?

Because the musical elements of the painting cannot make literal sounds, their inclusion in the composition finds their most compelling purpose in the symbolic realm. One of the most compelling elements of the Last Supper is the extent to which the painting’s meaning is linked to its numerology (the study of numbers and their symbolic properties). Numbers have an objective, scientific quality that help concretize abstract thoughts and ideas. Numerology helps the finite, temporally-bound human mind alive amid the profane earth conceptualize the subtleties and vagueness associated with sempiternal religious concepts such as omnipotence, sacrality, heaven, and divinity, that are inherently difficult to grasp on the rational level.

Numbers with the Last Supper

Numbers proliferate within the Last Supper, particularly the numbers three and four and their mathematical multiples. The apostles are arranged in four sets of three. There are four sets of tapestries on each wall with three spaces between them. The central back wall has three open windows framed by four structural supports. There are six (3 plus 3) rows of coffers that hover over the twelve apostles (3 times 4).

Symbolically, the number three traditionally represents divinity, wholeness, the heavenly realm: It takes three sides to make a complete triangle, which is the minimum number of lines needed to create a closed geometric whole. Indeed, Jesus Christ, the alpha and omega, the beginning and the end of mankind, is formed within the shape of a triangle in the painting, which unambiguously underscores this point. These ideas became manifested in Christian catechism as the Trinity. Indeed, triangular-based compositions proliferate in Christian art for precisely this reason. On the other hand, the number four connotes the earth, as understood as a finite space. The four cardinal directions and the four terminal sides of a square underscore the number’s equation to earthly being. These become symbolically expressed in the number of the Gospels, God’s Word in an earthly setting.

In terms of the painting, then, what does the overwhelming use of numbers signify within this symbolically-saturated scene? What abstract idea or transcendent concept might the artwork and its aural qualities be communicating via its numerology? Quite possibly the nature of God and how man can know and communicate with him. The threes (heaven), fours (earth) and their multiples seven and twelve (representing the interaction between heaven and earth) within the painting are all found in the way that the Bible tells mankind how to speak with God: The Lord’s Prayer:

Our Father who art in heaven, hallowed be thy name.
Thy kingdom come. Thy will be done on earth, as it is in heaven.
Give us this day our daily bread. And forgive us our [trespasses],
as we forgive our [trespassers]. And do not let us fall into temptation,
but deliver us from evil: For thine is the kingdom, and the power,
and the glory, for ever and ever.

Thus, Leonardo’s fresco—with the bread so visually accessible on the table, with heaven and earth symbolically expressed, with an evil trespasser who fell to temptation, with the Son of God announcing his death and the power and glory of eternal life it will bring to mankind—presents the world in a painting imbued with sound and vision and time and space a glimpse of the divine, a way of knowing the infinite and incomprehensible aspect of God in an artwork built upon rationality, proportion, visibility, and number.

Given the depth of thought that Leonardo placed into all his work, we can be sure of one thing: everything we see was done on purpose. The Renaissance era was one of overwhelming religious piety in addition to an exciting time for rational discovery. It makes sense that the two would blend so dynamically. The painting therefore ought to be seen as a natural expression of a deep theological space, created for mankind to reflect upon using its oldest medium. It seems to have worked.