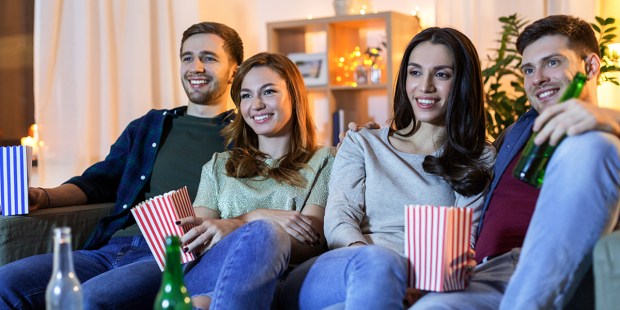 These aren’t new films but may be new to you — and perfect choices when friends and family are over!

My husband and I have one rule when we watch movies—we won’t see anything rated G or PG until our daughter is old enough to watch it with us in a few years. Slowly but surely, we are working our way through long lists of other movies that we haven’t seen yet, but think we should. Somehow, watching a “classic” movie can feel like work, but we all can — and should — reject the idea that “important” movies are less entertaining.

Summer is especially is a great time for watching movies with family and friends rather than by ourselves. And it’s worth the extra effort to choose a new movie instead of reaching for the same old DVDs at the back of your family room hutch. Consider choosing one of these films, which are all appropriate for pretty much anyone 13 and older. They may become new family favorites, and they at least will spark substantive conversation!

It took my husband seven years to convince me to watch this film, but now I want to rewatch it every couple of years for the rest of my life. These two men and their life-changing (at least for one character) conversation open windows into worlds and ideas like only the best art can do. Watch, discuss, and discuss some more. There is nothing like it.

Unlike My Dinner with Andre, I think people can hardly watch this movie young enough. It’s a powerful illustration of how a single person can change minds and hearts. Although it takes place almost entirely within a single room, you will be on the edge of your seat.

Among cinephiles The Third Man is widely regarded as one of the best films ever. How many viewers will skip right over it, not knowing it has a better plot, dialogue, and a more riveting chase scene than anything else in the crime-suspense category? Fair warning: This is one of the darker films on this list. (The screenplay is by acclaimed Catholic writer Graham Greene.)

What might happen if a Nazi escaped to Connecticut with a new identity? Like The Third Man, this movie deals with violence and evil, but that’s to be expected from a world processing the end of the war and the horrors of the Third Reich. There’s no connection to the Camus novel, by the way.

As this film progresses, Matt Damon’s character unravels, and so does what you think you know about him. It’s both funny and sobering, and it helped me appreciate all the ethical businessmen and women in my life who face various forms of white-collar temptation every day. Watch this film, learn a little about the economy, and then buy your hard-working loved ones a drink.

Audiences love a cool, stoic man, especially one with a face like Joseph Cotten’s. This film includes one of the most tragic outcomes of a love story I’ve ever seen, but I can’t imagine it making anyone cry. Watch it for parenting tips, for laughs, for a reflection on modernity and technology; but definitely watch it — preferably with others.

Speaking of stoic men, Cool Hand Luke (Paul Newman) is one of the most memorable film characters I almost never heard of. What makes Luke likable? What motivates him? Should a man want to be like him? This is a must-see for young men who think that playing it cool is an essential element of masculinity.

Recently, a Harvard professor was demoted from his position as dean after he decided to represent Harvey Weinstein at his sexual assault trial. Let’s just say that clearly the Harvard administration hasn’t seen this film in which Tom Hanks plays a lawyer who endures severe public backlash for representing an accused Soviet spy during the Cold War. Hint: The Tom Hanks character is right.

Read more:
7 Books every Catholic woman should read this summer