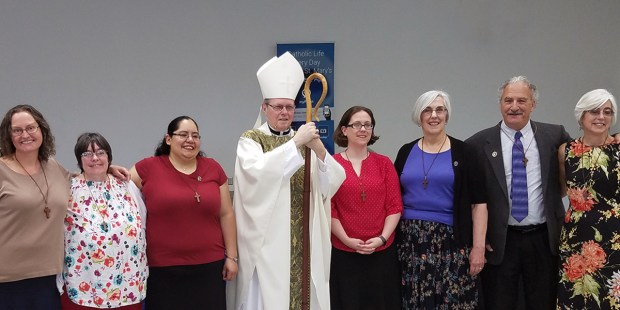 Says one graduate: I’m more confident about my knowledge of the faith, and with that confidence, better able to share it.

While Catholic dioceses across the country have religious education programs to train laity for church leadership, David Amico, director of the program for the Diocese of Albany, New York, says their Kateri Institute has at least two characteristics that have made it particularly successful.

He explained, “We believe in a cohort model, in which a group of people move through the process together. We also spend time in theological reflection. I think these are distinguishing factors.”

The Kateri Institute was founded in 1984, and named for St. Kateri Tekakwitha (1656-80), the “Lily of the Mohawks,” a Native American convert from New York who also did work on behalf of the Church as a laywoman.

The Institute offers those interested in becoming lay church leaders a program of prayer, retreats, study and other assistance in a two- to three-year program.

The ideal class size is 10; the most recent class graduated had seven. Participants partially fund themselves and are also funded by their parishes on a sliding scale, depending on what the parish is able to pay.

Read more:
Why are Catholics so notoriously bad at fellowship?

Amico, a Boston College graduate and former member of a Franciscan community, has led the program for the past 12 years.

“We believe in the holistic formation of our participants: human, spiritual, intellectual and pastoral,” he noted.

The study is interactive with participation encouraged, he added, “as we go deeper into various topics, trying to understand why we believe what we believe, and learn how to communicate our Faith better.”

It’s not uncommon for graduates to gather years later for prayer and socializing. Amico explained, “We form a sense of community, and support one another.”

Theological reflection occurs by “looking at some aspect of one’s lived experience and putting it into conversation with our faith tradition – with the hope that such reflection will lead toward a deeper insight into both one’s life and the faith tradition.”

Institute presenters include diocesan priests and deacons, and a handful of laity with advanced degrees. Fr. Matthew Frisoni, the diocese’s new judicial vicar, for example, teaches a course on canon law.

The positive results of the Kateri Institute can be measured in a variety of ways. Some graduates, Amico noted, have gone on to the permanent diaconate and to Catholic graduate schools, such as Franciscan University of Steubenville. Others have been active for years in a variety of Catholic ministries: RCIA, pastoral care of the sick, prison ministry and parish administration.

The Diocese of Albany is home to 300,000 Catholics served in 126 parishes and four apostolates. At the close of 2017, there were 93 active diocesan priests and 36 religious order priests, serving under Albany Bishop Edward Scharfenberger. Among the laity, more than 1,000 are graduates of the Kateri Institute.

Stephanie Nolet is a pastoral associate for administration at St. Mary’s Church in Crescent, New York, as well as a volunteer for music ministry, as a catechist and Eucharistic minister. She plans to start a Bible study in the fall. She graduated from the Kateri Institute in June.

Through the program, she said, “I learned much about our Catholic faith, everything from canon law to pastoral ministry and morality … It was refreshing to hear the input of various priests, men and women religious, and lay people who taught us along the way; each with their own individual area of expertise.”

She believes the Institute connected her with many key people in the diocese, and that she is “more confident about my knowledge of our Catholic Faith and with that confidence, feel better able to share our Faith and evangelize others.”

Bob Conway has been a long-time lay volunteer for a wide variety of church ministries, including as a Kateri Institute instructor for courses in liturgy, Scripture, and moral theology.  He went through the program that would become the Kateri Institute in 2007, and was motivated to go on and earn a master of divinity degree at St. Bernard’s School of Theology and Ministry in 2013.

His desire to volunteer in the Church goes back to his elementary school days, when he served as an acolyte for Masses, weddings and funerals.

“A desire to contribute as a lay person to the life of the Church at the parish, diocesan and associational level has been fulfilled by doing volunteer work in liturgy, faith formation and administration for the Church,” he said.

Amico concluded, “The Kateri Institute’s fruits have been helping a healthy number of laity who take their baptismal call seriously to live out their faith in a real and concrete way in our parishes. They have been a great benefit to the people of God.”