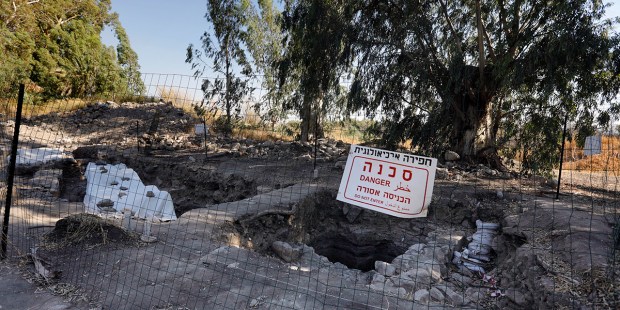 In the year 725 AD, a Bavarian bishop named Willibald toured the Holy Land and later reported having seen the church of Peter and his brother Andrew.

In the account of his travels, written by Hunenbreg, an Anglo-Saxon nun who knew Willibald personally, we learn of the pilgrims’ itinerary:

Then they went to Bethsaida, the native place of Peter and Andrew. A church now occupies the site where their home once stood. They passed the night there, and on the following morning set off for Corazain, where our Lord cured the man possessed of the devil and drove the demons into a herd of swine.

For centuries, this account has formed the basis of the Christian tradition that holds that a church was built over the homes of Jesus’ Apostles.

Now, as reported in an article at Haaretz, archaeologists believe they have found that church, which, based on the dates of silver coins collected at the site, may have been built in the Byzantine era, nearly 500 years after the apostles would have lived.

According to the Haaretz report, archaeologists from the Kinneret Academic College and Nyack College of New York excavating land located in the Bteikha Nature Reserve, by the Sea of Galilee, found evidence of a large Byzantine-era church, as indicated by the presence of mosaic tiles.

Prof. R. Steven Notley of the private Christian Nyack College in New York told Haaretz, “Those are for wall mosaics and only appear in churches.”

The site of the church was first discovered in 2017, and is believed by archaeologists to be the remains of an ancient Roman city believed to have once been the fishing village of Bethsaida, known from the Gospels as the home to the apostles Peter, Andrew and Philip.

To read more about the discovery of the Church of the Apostles, read the rest of the story at Haaretz.