See the evidence of miraculous events, some of which involved the transformation of bread and wine into actual flesh and blood.

Reports of miracles involving the most Holy Eucharist have spread for centuries and have increased the reverence for the precious Body and Blood of Christ.

These stories continue to inspire the faithful, and the sites of these miracles have become popular pilgrimage destinations, where you can still see the evidence of the miraculous events. 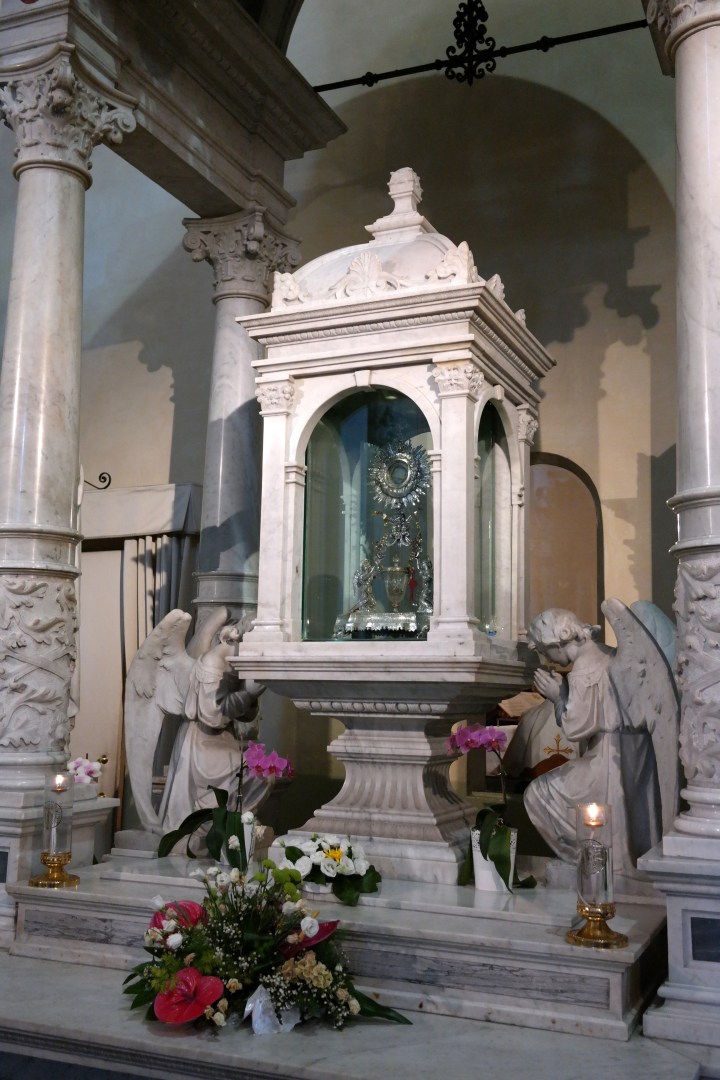 The Miracle of Lanciano

The Miracle of Lanciano is perhaps the most famous of the Eucharistic miracles.

In the 8th century, a priest in Lanciano, Italy had doubts about the real presence of Christ in the Eucharist. When he said the words of consecration during Mass, he saw the bread and wine transform into real human flesh and blood. The blood coagulated into five globules, which was later believed to be representative of the five wounds of Christ.

In 1971, a scientific analysis of the flesh found that the flesh was cardiac tissue and that the blood was fresh. The flesh and blood are still preserved to this day and you can visit the Church of San Francesco in Lanciano, Italy, to see it.

The Eucharistic Miracle of Santarém

A 13th-century woman from Santarém, Portugal, consulted a sorceress after her husband was unfaithful to her. The sorceress told the woman that she would help in return for a consecrated host.

The woman went to Mass and took the host out of her mouth after Communion and wrapped it in her veil. The host began to bleed, but she hastily took it home and hid it away. That night, a light began to emanate from the trunk where the host lay. She confessed her sins to a priest, who returned the host to the church.

The bloodied host remains on display at this church, which was later renamed Church of the Holy Miracle.

The Corporal of Bolsena

In 1263 a German priest stopped at Bolsena on his way to Rome. As with the priest in Lanciano, he had trouble believing the Real Presence. After the Consecration, the host in his hands began bleeding onto the corporal on the altar.

He went immediately to the neighboring city of Orvieto, where Pope Urban IV was visiting to confess his sin of doubt. It is said that Pope Urban IV was prompted by this miracle to commission St. Thomas Aquinas to compose the Proper for a Mass and an Office honoring the Holy Eucharist as the Body of Christ, which was introduced a year later, with the institution of the feast of Corpus Christi.

The corporal remains on display in the Cathedral of Orvieto and you can still visit the site of the miracle, St. Christina’s Church in Bolsena.

The Miracle of Blanot, France

On Easter Sunday, March 31, 1331, a host fell from the mouth of a woman at Communion time and landed on the piece of cloth covering her hands. When the priest, being informed of this incident, approached the railing where the host had fallen, he found a spot of blood where the host should have been.

After Mass, the priest took the cloth into the sanctuary to clean it, but instead of getting smaller and lighter with the cleaning, the stain actually got larger and darker. The cloth is still preserved today and is solemnly exposed every year on the feast of Corpus Christi.

The Hosts of Siena

On August 14, 1730, during a festival for the eve of the feast of the Assumption, thieves broke into the Church of St. Francis in Siena and stole a gold ciborium containing consecrated hosts. A few days later, the hosts were found in the offering box at the church, covered in dust.

The hosts were cleaned but still not suitable for consumption, so it was decided that the hosts would be placed in a new ciborium and left to deteriorate. However, the hosts remained fresh for decades and can still be seen in the (now) Basilica of St. Francis in Siena, Italy.

The Miracle of Chirattakonam, India

On April 28th, 2001, red stains appeared on the host during Eucharistic adoration at St. Mary’s parish in Chirattakonam, India. The priest put the host back in the tabernacle and returned a few days later to examine it. When he did, he noticed that stains had formed an image of a man crowned with thorns. The monstrance with the host remains enshrined in the church.