When Pope St. John XXIII brought us into his childhood home to promote a centuries-old devotion 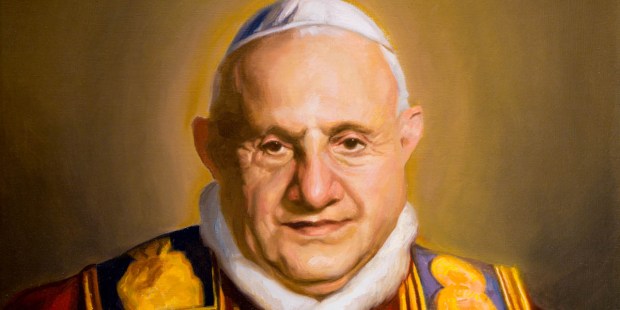 Turns out his family would recite a special litany every day in July, and the pope wrote about it in an apostolic letter.

In the Catholic tradition, each month of the year is associated with a particular devotional practice. January is for the Holy Name of Jesus, February is for the Holy Family, and so on. We might hear of this and think, “It’s good to know the Church recommends this … but what impact can it have on my life? Why should I do this?”

In a letter on the devotion to which July is dedicated, the Precious Blood of Jesus, Pope St. John XXIII provides an excellent example of how to encourage the modern person to traditional devotional practice.

In 1960 Pope St. John XXIII wrote the apostolic letter Inde a Primis, encouraging devotion to the Precious Blood of Jesus. The text of the letter follows a typical framework of papal documents of the time, taking the reader through the history of the Church’s belief or practice of the subject. After noting the Roman Church’s centuries-long encouragement of devotion to the Precious Blood, and its spread by the 19th-century priest St. Gaspar del Bufalo, Pope St. John tells us what the devotion has meant to him. It’s not often we get glimpses into the personal piety of the popes themselves!

It’s not often we get glimpses into the personal piety of the popes themselves!

In the letter, Pope St. John reveals that this particular devotion was central in his upbringing. He recounts how his own parents “used to recite the Litany of the Most Precious Blood every day during July.” Such an example illustrates the Church’s conception of the family as “the domestic church,” as the place where faith is first and primarily nurtured and grown.

Read more:
What the month of July means to Catholics and how to honor it in your home

Pope St. John then looks at the life of Christ and points to the many moments in which the Precious Blood appears. Christ’s blood was shed at his circumcision, in the Garden of Gethsemane, and in the tortures of his Passion and Crucifixion—the crown of thorns, the nails, the spear in his side. This spilling of blood, as the First Letter of St. Peter notes, is salvific: “You know well enough that your ransom was not paid in earthly currency, silver or gold; it was paid in the precious blood of Christ.” (1 Peter 1:17-19, emphasis added) We can easily forget that the title of this devotion comes from Scripture itself!

We can easily forget that the title of this devotion comes from Scripture itself!

From these theological reflections, Pope St. John encourages the faithful to greater devotion. If only we would be more mindful of the price of our salvation, of Christ shedding his blood for our sins, we would more likely avoid sin and cling to God. Even more so, as the saintly pope writes, “If only men would be more responsive to these promptings of his grace, how much the bonds of brotherly love among individuals and peoples and nations would be strengthened.” Once again, we can hear the pope’s cry from the heart.

To further entice the faithful toward this devotion, Pope St. John attached an indulgence to the recitation of the Litany of the Most Precious Blood—the very one his parents prayed when he was a boy.

In this apostolic letter, Pope St. John XXIII does not only make theological arguments, or appeals to Scripture or traditions of the Church to encourage Catholics to have greater devotion to the Precious Blood of Jesus. He certainly does that, and does so effectively. But he introduces the subject not by quoting texts, but by citing his own personal experience of the devotion. He offers his own testimony of its effectiveness, and then bolsters that experience with the backing of divine revelation of centuries of ecclesial practice.

This is not to say that we should rely on our experiences first and then search for theological justification for them.

But it is a good reminder that we ought to share our personal testimony about the power of the practice of faith in our lives. Pope St. John XXIII’s successor, Pope Paul VI, would write in his encyclical on evangelization, Evangelii Nuntiandi, that “Modern man listens more willingly to witnesses than to teachers, and if he does listen to teachers, it is because they are witnesses.”

Perhaps this is something he learned in observing his saintly predecessor.

Read more:
How to pray the Chaplet of the Precious Blood