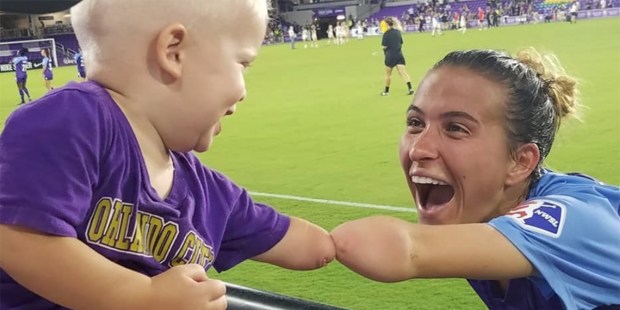 Memorable photos of the two friends at a soccer game have stolen many hearts.

Apparently, you only need one hand to steal a heart. It’s a trick that Carson Pickett and Joseph Tidd seem to have played on each other, as well as on the countless people who have seen the memorable photos of them “arm bumping” each other at a soccer game in early June (Pickett is a pro soccer player for the Orlando Pride). The photo shows Carson, who was born with only half of a left arm, with an ear-to-ear grin as she greets 22-month-old Joseph, who was born with the same limb difference.

Although the photo at the soccer game is the one that has gotten the most attention—going viral on social media and also getting coverage on television news shows—it’s not the first time the two have come together and greeted each other in this fashion. They met for the first time after an earlier game on April 15, when a Fox 35 Orlando television reporter they knew arranged for the meeting to happen, according to the Washington Post.

The family posted a video of the encounter on their Instagram account, and it’s adorable. Carson hunches down in front of Joseph and says, “We have cool arms!” showing him her short arm and pointing back and forth between her arm and his. It takes little Joseph a moment to figure it out, then he giggles and smiles.

SWEETEST REACTION 💜🧡💜🧡 . . I wanted to share this quick clip from our meeting with Carson the other day. For anyone who has asked “do they really know their different”, just watch this video. . . You can see the moment that Joseph pauses, the look on his face changes…he is thinking hard as he’s studying Carson’s arm. Then the joy that washes over him as he realizes “she’s just like me”. The smile and giggle followed by the unprompted desire to show his arm to Carson. . . This was the moment I love to see when those with a lucky fin connect. We have been lucky enough to see this several times at our lucky fin meet ups with other kids and adults. If you haven’t had a chance to attend a local meet up, go check out the Facebook page for your local chapter for more info. We will be at the Central Florida meet up for those in the Orlando area. . . Here are some pictures from the local news story with Carson on Tuesday. The link to the interview with Joseph and Carson is in our Bio. We even bumped into Bo Outlaw which made for an awesome picture with little Joseph. . . #luckyfinfamily #orlandopride #orlandomagic #booutlaw #tenfingersareoverrated #fox35 #fox35orlando #localnews #locals #heros #mentors #happiness #purehappiness #understand #bond #preciousmoments #heknows #coolarm #joy #giggles #newfriends #centralflorida #proud #limbdifferenceawareness #limbdifferenceawarenessmonth #biggerthansoccer #biggerthanbasketball

Another video shows them a few moments later playing something like peekaboo, covering and uncovering their handless arms, laughing and smiling. They are clearly enchanted with each other!

Yesterday we had the chance to spend some time with the beautiful and talented @carson.pickett who plays professional soccer for @orlpride in the @nwsl. Carson is part of our @lucky_fin_project family as she is missing her left hand. We have been following Carson since she was playing for @reignfc same city who also drafted our buddy @shaquem_griffin. She was traded to Orlando in Dec, we have been dying to meet her. Thank you to @fox35amy and the Orlando Pride for setting this up. We had the chance to talk with Carson and her parents. Long enough to see the strong spirit she has and the example she portrays on and off the field. What makes Carson different is not her arm but her desire to be the best. Her Dad said to me that one thing that was never allowed in the home were the words "I cant". Carson is an amazingly beautiful woman who stands as a shining example for our children. We will be going to many more Pride games and look forward to seeing Carson do a throw-in. I dare someone to give her a penalty for not getting the ball behind her head. The whole stadium and the Tidd family loves this girl and I would not want to be them. We'll share some more videos of the meet up soon, but this video of hide and seek with their arms is too funny. Such a sweet moment between 2 amazing people. #orlandopride #carsonpickett #tenfingersareoverrated #luckyfinfamily #luckyfinproject #limbdifferenceawareness #limbdifferenceawarenessmonth #strongwomen #differentlyabled #againstallodds #rolemodel #inspire #hideandseek #orlandokids #bigsister #imnotcryingyourecrying @lucky_fin_project @barstoolsports @espn @foxsports @nbcsports @cbssports @theellenshow @todayshow @goodmorningamerica

Their mutual reaction at the game in June is just as joyful and charismatic, as can be seen in the series of photos posted by the family. (Be warned: this Instagram account is a proverbial rabbit hole full of cuteness, so don’t click on the photo unless you have time on your hands. It’s “not safe for work,” but in a good way.)

Staying up late this weekend was worth it when you get to cheer on @carson.pickett ! ⚽️ I love fist bumping her.🤜 If you can't tell she makes me smile, double chin and all! . . . Swipe ➡️ to see how big my smile gets after I fist bumped her. I couldn't stop giggling! 😁 Carson is such a great role model. . . . #orlandopride #nwsl #biggerthansoccer #filledwithpride #luckyfinfamily #luckyfinproject #limbdifferenceawareness #16 #orlando #fistbump #doublechin #giggling #smile #grateful #stayinguplate #toddler #cheerleader #tenfingersareoverrated #orlandocity #orlandocitysoccer #rolemodel #soccer #unstoppable

The Washington Post’s Marisa Iati reports that Joseph has also met Seattle Seahawks linebacker Shaquem Griffin, a pro athlete with a similar limb difference, thanks to the Lucky Fin Project, “a nonprofit that celebrates people with limb differences” with a name referring to the main character of the Disney movie Finding Nemo.

In an interview with Fox 35, Joseph’s dad, Miles Tidd, explains how important it is to him for his son to have role models who look like him and who inspire him. Carson explains that her parents raised her never to say “I can’t” because of her limb difference; instead, she was taught to say, “I’m gonna do it, even though I’m missing an arm.”

She’s an inspiration not just to Joseph, but to many others who have the same condition—and to the rest of us who, perhaps, have fewer challenges and yet are more easily deterred. You can watch the full interview here:

Thanks to his loving parents and to the great role models who are inspiring him, Joseph is already learning to take his limb difference in his stride. According to the Washington Post article mentioned earlier, when Joseph introduces himself to other kids, he says, “I’m Joe Joe,” and “then he points to his arm and jokes that he bit off his missing hand.”

With his humor and his joy, “Joe Joe” himself is already being an inspiration, like his hero Carson. We can only hope that these wonderful photos and the beautiful story behind them help create a world where people with differences of any kind are welcomed, treated without stigma, and encouraged to participate fully in all of life’s joys and activities.

Read more:
This musician’s disability helped her create a sound all her own