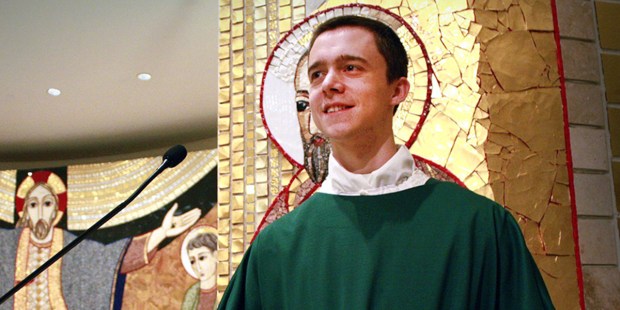 He began to pray daily for those struggling to beat their addiction to pornography, and it caught fire.

Fr. Cassidy Stinson (a.k.a. @TheHappyPriest) is a newly ordained priest of the Diocese of Richmond with a penchant for social media. Convicted there’s value to digital community building, he puts a fair amount of time and energy into his well-curated profiles.

Hey. We need to talk about something.

I knew this before I became a priest, but now it’s become all the more clear to me that this is an absolute scourge for so, so many of us, spiritually and psychologically.

And you know what? I’m tired of it.

Such a direct approach might seem to some to come out of nowhere, but Fr. Cassidy explains, “I kept noticing patterns. Very early on in my assignment I found this sin would be a particular part of my ministry as a confessor. For a lot of young people, pornography is a big struggle but no one talks about it. The sense of isolation only intensifies their challenges.”

In a 2016 survey, the Barna Group reports that 64% of young people (ages 13-24) seek out internet pornography once weekly or more. To Fr. Cassidy, that statistic is no surprise. He says, “No one is talking about something that’s endemic. If other sins were as big a problem, we’d be taking bigger steps. But because there’s so much shame attached to viewing pornography, no one wants to address it.”

So Fr. Cassidy started talking … well, tweeting. “I wanted to start a conversation,” he insists. “The internet can be a place for that dialogue.”  In his view, “The key is taking away the isolation and despair that people fall into. I hope that people who discover #BreakTheChains, can see that social media is not all bad. Social media can be a vehicle for growth in holiness. I’ve been convinced of this by the Pauline family.”

The importance of using the media to spread positive news and build up other Christians was the impetus of Bl. James Alberione, founder of the Society of St. Paul and the Daughters of St. Paul. Fr. Cassidy’s admiration for Alberione and the Pauline family led him to become more involved in media evangelization.

Though conversation and community-building is important, prayer is the heart of the #BreakTheChains movement. “On day one, people started asking for prayer requests and a number of people have begun to share their own stories,” Fr. Cassidy says. “A new confidence has begun to be built and shared. People have repeatedly attested that having a community to pray with is the most helpful thing they’ve ever had.”

Fr. Cassidy says here’s a need for really serious prayer for this. “I thought for quite a while about how I wanted to publicly commit to praying for this cause. The whole idea was to basically create a vehicle for people making prayer their own. #BreaktheChains gives people a common place and language to share their prayer. People contribute their prayers to the movement in many ways, the Rosary, the breviary, their own daily prayers, the Psalms, one person even wrote a novena!”

For Fr. Cassidy, the most powerful weapon we have, apart from the graces of the sacraments, is the intercession of the Virgin Mary. He believes her prayers are all but essential for growth in purity. Fr. Cassidy recalls, “In my first semester of seminary, I joined the Angelic Warfare Confraternity. It was then that I began the custom of praying 15 Hail Marys everyday for purity. By sharing pictures of the Rosary, I wanted to share that dedication to her.”

Building up a habit of prayer has to start small. Fr. Cassidy explains, “When I’m talking to people as individuals, I try to get people to pray a decade. Three minutes of letting Our Lady in can make all the difference.”

Ultimately #BreakTheChains aims to help people heal. According to Fr. Cassidy, “I want to see people praying in a dedicated way for healing in our culture. This is the sort of thing that will only be driven out by prayer and fasting.”

But viewers are not the only victims. Fr. Cassidy says we need to pray for people involved in the creation of media that leads people into temptation. “My biggest intention presently is for the redemption and conversion of those in the pornography industry,” he says. “Prayers for reparation and healing will help to redeem the wounds that have been caused.”

You can follow Fr. Cassidy on Twitter to join the #BreakTheChains movement as well as listen to a podcast episode he’s recorded on the topic.

Fr. Cassidy also mentioned the value of joining the Angelic Warfare Confraternity — a society for prayer under the patronage of St. Thomas Aquinas, sponsored by the Dominicans. More information about the confraternity can be found here.

Short of that, remember to pray for the graces of purity in your own life. As Fr. Cassidy reminds us, the intercession of the Virgin Mary is especially powerful!

Read more:
13 Celebrities who chose to save sex till marriage