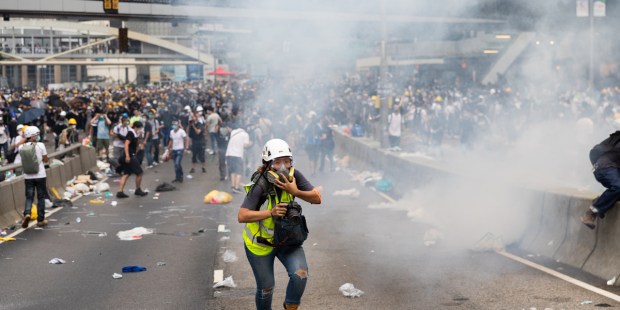 Even though the leader of Hong Kong has announced that withdrawal of a controversial bill that would have allowed extradition to the People’s Republic of China, protests in the former British colony are expected to continue. In the midst of the continuing tensions, a Catholic bishop in the territory has warned that the sadness prevalent among youth in Hong Kong can turn into despair.

Bishop Ha, an auxiliary bishop of the Catholic Diocese of Hong Kong, told Catholic News Agency that he hopes prayer will help transform the area into “a channel of God’s peace.”

“It’s been a tradition for us to fast on Fridays,” said Ha, who has taken part in ecumenical prayer services with protestors. “With fasting and prayers, we hope that we can help ourselves to strengthen our mind and soul to fight evil thoughts. Then, we would be in a better position to help fellow Hong Kongers.”

Bishop Ha said he is concerned about the safety of young people involved in the protests, but also about their emotional health. “Feeling sad, helpless and sometimes even furious is not unusual,” he said. “However, we must prevent sadness developing into hopelessness, prevent anger turning into hatred.”

Cardinal John Tong, apostolic administrator of Hong Kong, had asked the government to withdraw the extradition bill. He had also called for an independent inquiry into the excessive use of force by the Hong Kong police.

Withdrawing the extradition bill was only one of five demands of the protest movement. Lam declined to take action on the others: greater democracy for Hong Kong; an independent investigation into the police response to the protests; amnesty for arrested protesters, and direct elections for all lawmakers and the chief executive.

She said all investigations would be carried out by the existing Independent Police Complaints Council (IPCC).

“We must find ways to address the discontent in society and look for solutions,” Lam said in a a video statement Wednesday evening. “After more than two months of social unrest, it is obvious to many that this discontentment extends far beyond the bill.”