The church that rose when the towers fell

This story definitely shows how Providence works: Read why the church near the World Trade Center was there at all.

In 1785 when the cornerstone was set for what would be the first parish church in New York State, the builders would have been staggered at the role it would play in New York’s tumultuous history … especially because it wasn’t even supposed to be there.

Anti-Catholic sentiments had forced the early Catholics to build the church where it stands today, on Barclay Street, after their bid to build it in the center of the City had been rejected. The city officials wanted the church as far from the center as they could get it, so it was banished to the outskirts of town. It stands as a deep irony that some 200 years later, perhaps the two most iconic buildings in the world would be built one short block away.

After the parish’s first 50 years of service — which included hosting the city’s first Catholic school and tirelessly caring for the community through the yellow fever epidemics of 1795 and 1798 — a new church building was to be placed on the old foundation.

In 1838 none other than Bishop “Dagger John” Hughes commissioned the new church to be constructed in place of the first, to better serve the growing needs of the diocese. It stands today much as it did then, and much as it did on the fateful warm sunny morning that would change the course of history.

The day was September 10, 2001. Father Mychal Judge celebrated mass at FDNY Engine 73/Ladder 42 in the South Bronx and spoke these words in his homily to his firefighters:

“That’s the way it is. Good days. And bad days. Up days. Down days. Sad days. Happy days. But never a boring day on this job. You do what God has called you to do. You show up. You put one foot in front of another. You get on the rig and you go out and you do the job — which is a mystery. And a surprise. You have no idea when you get on that rig. No matter how big the call. No matter how small. You have no idea what God is calling you to. But he needs you. He needs me. He needs all of us.”

Little did those firefighters know that in courageously and selflessly following those very words, 343 of their number would not be returning to their stations the next day. And Fr. Mychal — living out his call to serve the men and women of the FDNY — would be counted among those who made the ultimate sacrifice. While he was anointing and blessing those who had fallen, he was struck by a piece of debris. Fr. Mychal went down as the first casualty at Ground Zero … his death certificate reads Victim 0001. 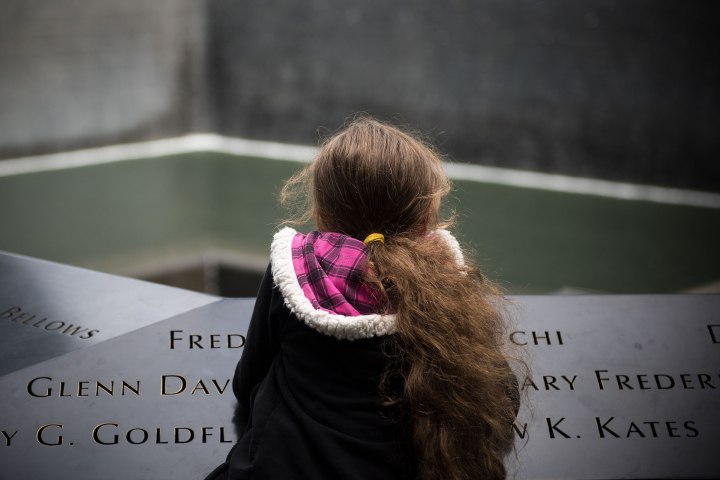 Firefighters and Emergency Service workers bravely fought through the debris and rubble and carried his body to St. Peters and tearfully laid him before the altar — the same altar that St. Elizabeth Ann Seton stood before when she converted to the Catholic faith, the same altar that Venerable Pierre Toussaint and his wife and niece knelt before to receive the Blessed Sacrament, and the same altar where three dozen additional victims would be laid as the day wore on.

“Prior to September 11th we were accustomed to look at the Twin Towers as the symbol of America’s strength and power in the world of trade, commerce and finance. But as those buildings turned to dust before our eyes, we came to look to each other to see where our true strength and power lie. Our true strength was in all those acts of compassion, those deeds of generosity and self-sacrifice that were performed that day and in the days, weeks, and months afterward.” Fr Kevin Madigan, Pastor of St. Peters Church on September 11, 2001

“Christ was there that day, in all the people that showed up that day … he was with us through all our grief and our sorrow … it was the Lord, the Spirit that helped to sustain us to get through the tragedy … God was definitely with us on that day.” Fr. Tom Colucci –

Look Up Stories of Hope

As the Towers came down, St. Peter’s Church rose to become the face of Divine Mercy amidst the brutal agony and suffering of what was the most devastating tragedy in the history of New York City. Perhaps this little church that was denied a place in the old city center was actually meant to be in the very center of this calamity, and to be the very heart that would bring life, healing, and hope to all those whose tears would not be wiped away.

The church endures as a sanctuary for prayer and a source of the sacraments as it has been since its foundation. But within the context of 9/11, it also stands as a symbol: a symbol of God’s ever present love for us especially when we are in the depths of despair.

Here, in this place of remembrance, I would ask everyone together, each in his or her own way, to spend a moment in silence and prayer. Let us implore from on high the gift of commitment to the cause of peace. Peace in our homes, our families, our schools and our communities. Peace in all those places where war never seems to end. Peace for those faces which have known nothing but pain. Peace throughout this world which God has given us as the home of all and a home for all. Simply PEACE.In this way, the lives of our dear ones will not be lives which will one day be forgotten. Instead, they will be present whenever we strive to be prophets not of tearing down but of building up, prophets of reconciliation, prophets of peace. Pope Francis at his visit to Ground Zero