Why envy comes to us from Hell, with the devils choosing it right after pride 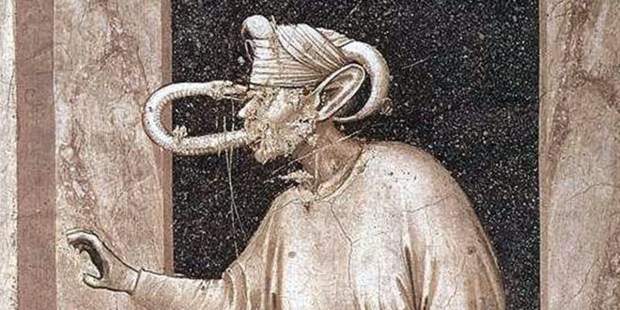 Which is worse—envy or jealousy?

That’s a bit of a trick question. People use them interchangeably, so it’s like asking, “Which is more round—an orb or a sphere?”

The present catechism states: “Envy refers to the sadness at the sight of another’s goods and the immoderate desire to acquire them for oneself, even unjustly. When it wishes grave harm to a neighbor it is a mortal sin.”

Jealousy and envy differ significantly. Put simply:  Envy is someone angrily staring at people eating. Jealousy is violently driving away the one who is staring.  I also think that envy is the worse of the two. This illustration may help to explain why.

I attended a backyard birthday party for a 5-year-old boy. Mikey’s parents seemed to have bought the first five aisles of the toy store for the occasion. Mike was the first out the door, running from package to package, squealing with delight. Things got ugly when the other children ran into the yard with him, equally delighted with the packages. He ran from child to child, grabbing packages and yelling, “MINE!” He was becoming overloaded. At the far end of the yard was the Grand Prize: a battery-powered jeep with enough room for Mikey and his loot—his getaway car! He piled packages into the front and back seats and looked to make his escape. To his horror, he saw that he would not be able to get all of his goodies into his car. There were just too many children to fend off, and not enough space for all the goodies. In despair he yelled: “NOOOOOOO!” I thought to myself: “If Dante had seen this, there would have been another canto in the Inferno.”

Envy, my children, follows pride; whoever is envious is proud. See, envy comes to us from Hell; the devils having sinned through pride, sinned also through envy, envying our glory, our happiness. Why do we envy the happiness and the goods of others? Because we are proud; we should like to be the sole possessors of talents, riches, of the esteem and love of all the world! We hate our equals, because they are our equals; our inferiors, from the fear that they may equal us; our superiors, because they are above us.

In the same way, my children, that the devil after his fall felt, and still feels, extreme anger at seeing us the heirs of the glory of the good God, so the envious man feels sadness at seeing the spiritual and temporal prosperity of his neighbor. We walk, my children, in the footsteps of the devil; like him, we are vexed at good, and rejoice at evil.

Envy is not rational; it does us no good. Satan is the perfect illustration of that truth. Yet envy can be a very effective political strategy: “The ‘Haves’ have because you are the ‘Have-Nots’! Vote for me and I will take from them and give to you!”

Only a person of clear mind and sterling character can resist being offered free stuff in exchange for the small price of a vote. That’s how mobs are made and tyrants rewarded. History is replete with bloody examples of what happens when envy sets a populace aflame.

At the farthest extreme, envy can lead to violence. More commonly, envy leads to resentment, debt, and the loss of ability to enjoy anything that is good. The Old Testament offers many such warnings. Here are just a few:

A heart at peace gives life to the body, but envy rots the bones. (Proverbs 14:30)

Resentment kills a fool, and envy slays the simple. (Job 5:2)

The New Testament urges us to raise our hearts above trivialities:

You desire but do not have, so you kill. You covet but you cannot get what you want, so you quarrel and fight. You do not have because you do not ask God. (James 4:2)

Sin is an expression of the irrational desire to place some good above the supreme good who is God. Envy is especially repulsive because it generates spite—an inclination to say (and, worse, bring about): “If I (and I alone) can’t have that—then no one can!”

Let’s have an examination of conscience this week, and see if the idol of envy has a shrine in our hearts. And then let’s go to confession.

When I write next, I’ll continue our series of reflections on a renewed look at the seven deadly sins. Until then, let’s keep each other in prayer.