Pope: When a people considers the old and the young as treasures, God is there 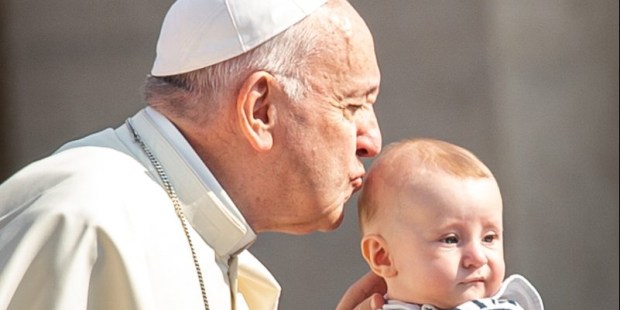 A culture of hope is represented by children and the elderly, Francis says

Pope Francis says that a sure sign of the presence of God is seeing a people that treasures both the elderly and children.

He said this in reflecting on the First Reading of today’s Mass, which says:

Thus says the LORD of hosts:  Old men and old women,
each with staff in hand because of old age,
shall again sit in the streets of Jerusalem.
The city shall be filled with boys and girls playing in its streets.

When there is respect, care, and love for life, the pope explained, this is a sign of God’s presence in our communities.

“The abundance of elderly people and children. This is the sign that when a people cares for the old and for the young, and considers them a treasure, there is the presence of God, a promise of future,” Francis said.

Read more:
Euthanasia isn’t about being free; it’s about being reduced to a dollar sign, says Pope Francis

The pope noted the prophecy of Joel: “Your old men will dream dreams, your young men will see visions,” explaining that the prophecy speaks of a reciprocal exchange between the generations. This doesn’t happen when the culture of waste prevails, Francis warned.

He described the culture of waste as one that “sends children on their way back to the sender” or locks the elderly up in retirement homes because “they are not productive” and perhaps hinder us in our everyday lives.

Pope Francis recalled a story his own grandmother used to tell him about a family in which the father decided to move the grandfather to the kitchen during meal times because he would spill his soup and soil his clothes.

“One day,” the pope said, “the father came home to find his son building a little table,” meaning that sooner or later he too would be a victim of that same kind of isolation.

When you neglect children and the elderly, the pope said, you end up being part of those modern societies that are living a demographic winter.

“When a country grows old and there are no children, when you don’t see children’s prams on the streets and you don’t see pregnant women (…), when you read that in that country there are more pensioners than workers, it’s tragic!” he said.

It’s tragic also to lose the traditions passed down by the elder generations, the pope said, describing traditions “not as museums,” but as lessons for the future:  “the lymph of the roots that make the tree grow and bear flowers and fruits”.

At the heart of God’s message, Pope Francis explained, is a “culture of hope” which is represented by the old and the young.

“The elderly and the young, together. This is the sign that a people cherishes life, that there is a culture of hope: the care of the young and the elderly,” he said, “they are the certainty of the survival of a country and of the Church.”

Read more:
Pope Francis: People are worth more than things