The greatest pitfall in married life 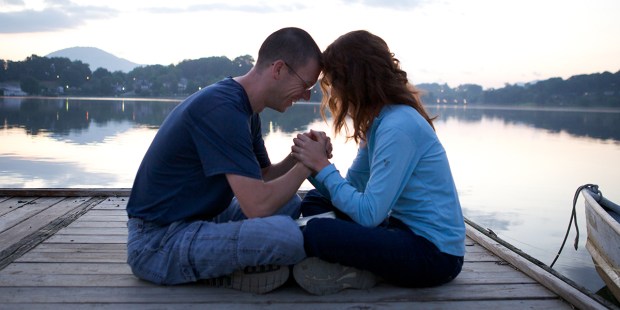 In a relationship, we instinctively want to make our partner happy. But this noble inclination competes for first place with another instinct: that of self-preservation. When we expect from another the answer to our own thirst to be loved, received, and understood, we risk devouring each other … How can we avoid the greatest trap of married life, and live the fullness in which a spouse is in fact the sign of something greater?

“This is the paradox of love between man and woman: two infinites meet two limitations, two infinite needs to be loved meet two fragile and limited capacities to love. Only on the horizon of a greater love do they not consume themselves in pretension and do not resign themselves, but walk together toward a fullness of which the other is sign.“

This quote from a letter from the German poet Rainer Maria Rilke (1875-1926) to a French friend clearly reveals one of the greatest pitfalls of a relationship.

Even if it’s true that at the heart of a couple is the desire to make each other happy, it’s also true that this noble inclination competes for first place with the natural instinct of self-preservation. At mealtime, quite naturally, a small child does not think of his brother first. Rather, he sees him as a competitor, almost a threat. The same is true in the life of a couple. In us, the need to be loved, understood and received is naturally stronger than the need to give oneself and receive the other.

For women, this thirst to be loved, received, and listened to is almost infinite. In men, this usually corresponds to a capacity that is undoubtedly less, certainly not infinite. A man may display an almost infinite thirst to be respected, admired and desired… but a woman is not able to quench all of this thirst. So, if we lock these both thirsts in a small space and lock the door, it may not be pretty.

We find the same theme in several texts of John Paul II’s theology of the body. We also find it in Benedict XVI, especially in his encyclical Deus Caritas Est. It was already found in the works of Pierre Teilhard de Chardin, the great French theologian of the 20th century. A contemporary of Rilke, he explained in his short essay L’éternel féminin, that when a man falls in love with a woman, a force, unknown to date, awakens in him. It is a kind of intoxication that surpasses him. It’s almost as if the woman were a promise of fullness of joy for the man.

But at the same time, Teilhard de Chardin argues that a woman is unable to fulfill this expectation. She’s not the source of fulfillment of this promise, he explains, but rather a sign of it. This means that the beauty of woman awakens in man a thirst for fullness, which is ultimately a thirst for God. If the man seeks to quench this thirst in the woman, he will inevitably be disappointed. If he expects all this happiness from the woman, then — still according to Teilhard — the man can even become violent out of frustration.

It’s important for both women and men to know that a woman’s beauty is not the source: it’s the sign that indicates the existence of this source. When the two go to the source to draw from it together, if both approach God in the unity of their relationship, and expect their happiness to come in a large part first from Him, they will find peace for their souls. God does not play with us. He takes us seriously!

We find this same reality in the woman’s desire to find in the man a safe and stable refuge, the rock on which she can always rely and rest. It is also important for both of them to know that man is not the rock, but that he is the sign of the existence of this rock … To build their house there, man and woman could therefore go together to this rock that is the Word of Jesus (Mt 7:24-27).

Let us remember St. Augustine. He’s known to have first sought his happiness in created things. In his own flesh, this great Father of the Church had come to understand that true happiness was not found in God’s creatures but in the Creator. Women — starting with our spouse — can help us move in the right direction. But they are not the source of our happiness:

“I asked the earth, and it answered me, ‘I am not He’; and whatsoever are in it confessed the same. I asked the sea and the deeps, and the living creeping things, and they answered, ‘We are not thy God, seek above us'” (Saint Augustine, Confessions, chapter 10).

This is good news! Because the relationship between spouses is a true mutual gift, a place of great joy. But at the same time, it necessarily contains small imperfections, which sometimes cause us inevitable frustrations. Let’s not forget that we’re still on the earth, a place of learning. We’re not yet in heaven. Instead of letting these imperfections become causes of annoyance, let them remind us that our spouse is not the source of our joy. They’re not even supposed to be. They’re only a sign that such a source exists.

The sacraments are the visible sign of an invisible presence and action of God. A piece of bread cannot make us happy, and a sign of the cross cannot give us the peace of forgiveness. However, they make visible a God who, in the Eucharist, nourishes us under the sign of bread—the same God who forgives us in confession with the sign of the cross. In this sense, man is also a sacrament that makes his invisible Creator visible. Thus, your spouse, in all their beauty and imperfections, may be for you a sign that simply reminds you that the true source of peace exists, but that it’s in God. As Pope Francis explains:

“Neither spouse can expect the other to be perfect. Each must set aside all illusions and accept the other as he or she actually is: an unfinished product, needing to grow, a work in progress.” (Amoris Laetitia, 218).

How many people abandon their homes with the illusion of finding in another person the happiness that their spouse could not provide? Perhaps they’d not been told that humans don’t work like that. Happiness is the fruit of having loved, of having given oneself faithfully, knowing that the source of joy is not in another human being, but in God.

A source for learning to love

Two great experts in the life of a couple, the evangelical pastor John Eldredge and his wife Stasi, give this advice to couples in their brilliant book Love and War: “Dear men and women, may the couple not be for you the place to seek your happiness, but rather the place to learn to love.” And if that isn’t enough, let’s remember the word of Jesus himself when he tells us: “If any one comes to me without hating his father and mother, wife and children, brothers and sisters, and even his own life, he cannot be my disciple.” (Luke 14:26).

Whoever seeks Jesus first, will then be able to love others much better: this is a sure doctrine, which has proven its worth for more than 2,000 years. Become witnesses to this beautiful and great truth!

Read more:
4 Rituals you should incorporate into your married life

Read more:
Cooking priest encourages couples to “spice up” their married life with faith and sacrifice