The Catholic Church in Hawaii: A faithful traveler’s guide

The combination of its stunning natural beauty and fascinating Catholic history makes Hawaii and unforgettable place to make a pilgrimage.

The Catholic Church in the Hawaiian Islands has had a significant presence since the 1800s. Today, the Diocese of Honolulu, which includes all the islands, has 220,000 Roman Catholics, or about 16% of the total population of 1.4 million. They are served by 116 priests in active ministry, most of whom are from religious orders or outside diocese. They work in 66 parishes and 25 missions; there are also 20 Catholic elementary schools, six high schools and one university. 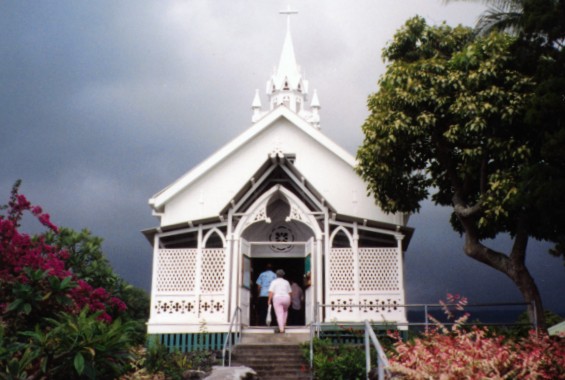 The 5th and current bishop of Honolulu is Bishop Larry Silva, whose great grandparents were born in the Portuguese Azores and came to Hawaii in the 1870s to work on the sugar cane plantations. The bishop was born in Honolulu, grew up in California, was ordained a priest for the Diocese of Oakland, and returned to be its bishop in 2005. While Hawaii’s landscape is “stunningly beautiful,” the bishop said, ministering over multiple islands presents ongoing logistical challenges.

The first official missionary effort in Hawaii began in 1827, when three priests and three brothers of the Congregation of the Sacred Hearts of Jesus and Mary (SS.CC) arrived in the islands and celebrated Mass in a grass hut in Honolulu. There was a significant New England Congregationalist missionary effort underway on the islands, however, who had a friendly relationship with the Hawaiian royal family and saw Catholic missionaries as hostile competitors. The priests were expelled in 1831, and native Hawaiians who had adopted the Catholic faith were subject to persecution.

A French warship appeared off the coast of Honolulu and threatened to fire on the city in 1839, however, prompting King Kamehameha III to issue the Edict of Toleration in 1839. Catholic missionaries were now free to evangelize, and Hawaiians were free to accept and practice the Catholic faith. In the years following, Catholic churches were founded on Oahu and the neighboring islands, with the Diocese of Honolulu established by the Vatican in 1941.

Cathedral of Our Lady of Peace

King Kamehameha III donated land for the first and most famous of Hawaii’s Catholic churches, the Cathedral Basilica of Our Lady of Peace, dedicated in 1843. The diocese is trying to raise $20 million to complete the renovation of the “quite historic” structure, Bishop Silva said. Located in downtown Honolulu, it is made of blocks of coral taken from local reefs; highlights include its historic tower clock and pipe organ. Inside it houses a first class relic of St. Damien of Molokai and the remains of St. Marianne Cope, the islands’ two most prominent Catholic figures.

St. Damien (1840-89), originally from Belgium, was a member of the CC.SS and volunteered to be a missionary in Hawaii. He was ordained a priest in the cathedral in 1864, and became famous after he devoted the last 16 years of his life to caring for the lepers confined to the Hawaiian island of Molokai. He ultimately died of the disease.

St. Marianne (1838-1918) was a nun who left New York with a small group of nuns to care for Damien during his final months of life, and continued his work after his death. The pair are honored in parishes throughout the islands. In 2020, the SS.CC community will open a Damien and Marianne of Molokai Education Center at St. Augustine Church in Waikiki to tell their story and display artifacts.

Other significant Catholic sites include the Kalaupapa and Kalawao regions on the north side of Molokai, where Fr. Damien ministered; 8,000 lepers—or “patients,” as they prefer to be called—were forcibly exiled there between 1866 and 1969. Among those confined to Molokai were a relative of Bishop Silva. He leads groups of pilgrims there four times a year, and has had his diocese create an official pilgrimage guide for visitors. Featured Molokai sites include the St. Philomena Church, where Fr. Damien celebrated Mass, St. Damien’s original gravesite and St. Joseph Church, Kamalo, built by Fr. Damien and located outside the leper colony.

Only a handful of elderly patients remain today by their own choice, served by Department of Health staff. Visitors are welcome, but most must fly in through Father Damien Tours. An SS.CC priest, Fr. Pat Killilea, is assigned to serve Kalaupapa’s St. Francis Church.

Other popular historic Catholic sites on the island include St. Benedict Parish, Honaunau, on the Big Island. Known as “the painted church,” it was built in 1899 and features 120-year-old paintings of scriptural scenes by Fr. John Velghe, a former pastor. Another church on the Big Island is St. Peter by the Sea Mission – Kahaluu, a small blue and white chapel established in 1880. This shoreline church only has 12 pews, and is popular for weddings. Holy Ghost Church, Waiakoa, Maui is also worth a visit, built in 1895 and notable for its octagonal design.