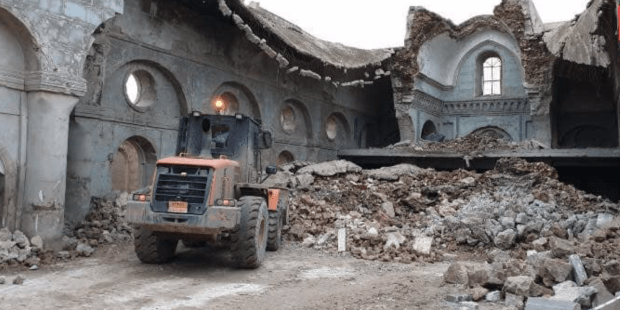 The two churches were destroyed by the Islamic State when it overran Mosul, Iraq’s second largest city, in 2014.

Even as recent geopolitical developments have exacerbated fears of a resurgence of the Islamic State terror group, plans to rebuild two churches in Iraq have emerged, with financial aid coming from the United Arab Emirates.

The churches were destroyed by the Islamic State when it overran Mosul, Iraq’s second largest city, in 2014. Christians were scattered from the metropolis and the nearby Nineveh Plain, as ISIS imposed Sharia law. Even after Mosul was liberated, Christians wondered if they could return. Would the city ever be safe again? Could they trust their neighbors, who in many cases took over the properties they had to leave?

ISIS fighters have been said to be lying low and ready to regroup if the opportunity presents itself. The United States’ recent pullback from neighboring Syria, withdrawing support from their Kurdish allies, who were guarding prisons full of the Islamist fighters, was not encouraging news for still-vulnerable Christian communities.

But the United Arab Emirates and UNESCO, the United Nations’ cultural organization, seem to be casting a vote of confidence for Iraq’s Christians. A partnership announced October 10 will help rebuild two Catholic churches in Mosul that were destroyed in the ISIS rampage of 2014.

The partnership is part of the UAE’s “Year of Tolerance” initiative, which began with a $50.4 million agreement signed in April 2018 to help rebuild historical landmarks in Mosul, according to Catholic News Agency. The October 10 announcement is an addition to UNESCO’s Revive the Spirit of Mosul Initiative, which UNESCO called an “important step for the Christians of the East who are part of Mosul history and future.”

“Today’s signing is a pioneering partnership that sends a message of light, in seemingly darker times,” Noura Al Kaabi, UAE Minister for Culture and Knowledge Development, said at UNESCO headquarters in Paris. She was accompanied by UNESCO Director-General Audrey Azoulay; the Ambassador of Iraq to France, Abdulrahman Hamid al-Husseini; and Dominican Brothers Nicolas Tixier and Olivier Poquillon.

Al-Saa’a is a Dominican church that was built between 1866 and 1873, and is often referred to as “Clock Church,” due to the clock lodged in its tower, a gift from Empress Eugenie of France to the Dominican Fathers of Mosul. Once rehabilitated, its convent will serve both as place of worship and as a community center for all of Mosul’s residents, UNESCO said.

Al-Tahera is a Syriac Catholic church built in 1862.

In January 2019 I visited this Church with the College of Archaeology / Mosul University. pic.twitter.com/22WCgEbrqA

University of Mosul students—from the departments of archaeology, architecture and engineering—are expected to take part in the process of restoration of landmark buildings, according to UNESCO.

“By rebuilding a fraction of the past, Iraq can shape its future as an inclusive, tolerant and open society which has always found a tangible manifestation in Mosul’s rich historical sites,” Al Kaabi said.

During the signing ceremony, the international partners described the rehabilitation of the churches as “important not only because of their value as cultural heritage, but also as testimonies to the diversity that has been the historic hallmark of the city, a proud crossroads of cultures and a peaceful haven for different religious communities over the centuries,” according to a UNESCO press release.

Brothers Tixier and Poquillon thanked UNESCO in the name of the order and reiterated their attachment to Mosul, where Dominicans have built bridges among all communities since the 18th century.

CNA noted that the Islamic State destroyed at least 28 sites of religious significance in the city after taking control of it in June 2014, including the Tomb of Jonah, Iraq’s oldest monastery of the Assyrian Church of the East.

Inter-religious teams have already been cooperating to rebuild parts of the city, the news agency reported. In April, Syriac Catholic Archbishop Youhanna Boutros Moshe of Mosul told Aid to the Church in Need that “there are very clear and concrete signs of progress” in the Mosul area.

“Credit belongs to the faith-based and humanitarian organizations that rushed in to support us,” he said. “However, we still lack the funds to complete the reconstruction of all the homes that were very badly damaged or completely destroyed; we are waiting and hoping that governments, like those of the United Kingdom and Hungary, will step in and help us on this front.”