Is there a difference between an aureole, a halo, and a mandorla? 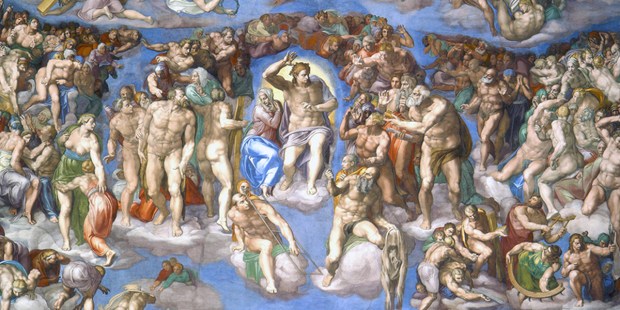 Often confused with each other, aureoles and “almonds” play a key role in Christian iconography.

Several different symbols have been used in Christian art to suggest the divine nature or the holiness of the persons portrayed in religious imagery. Some of them might be attributes assigned to different saints because of some biographical or hagiographical facts. Others might be allegories pointing at some specific exegetical reading of a biblical passage. Others might be titles granted to either biblical figures or characters belonging to the Christian tradition.

But some others are a bit more universal, less dependent of the individual traits of the person being portrayed. In general, when Christian art wants to represent either the divinity itself or a saint, it uses aureoles, mandorlas, halos, and nimbi. But are these for everyone?

Aureoles and mandorlas seem to be exclusively used to represent the Trinity, and sometimes the Virgin Mary. Saints were almost always represented with just a halo, a zone of light (generally a round one) surrounding their heads, or behind them. Why is this the case?

Read more:
The ancient, secular reason why saints are shown with halos

The aureole is, in fact, a symbol of divinity and, in that sense, also of supreme power (the kind of power only attributable to God). Therefore, its use has been reserved for representations of the divinity: Father, Son, and Holy Ghost. The use of an aureole, however, has been extended only to representations of the Virgin Mary, she being the Mother of God, the perfect daughter of the Father, and the Full of Grace (of the Spirit).

An aureole, unlike a halo, is a whole field of radiance (and not just a small round illuminated zone around the head) and splendor that encircles the whole body of the character represented (most of the time, that of Christ). In some cases, as George Ferguson explains in his Signs and Symbols in Christian art, “the aureole follows the form of the body and appears to emerge from it. In other instances, it is removed from the body and is composed of many luminous rays issuing from a central point.”

If the earlier aureoles we find in Christian art were often white, by the Renaissance we already find golden aureoles, giving the impression of bright, majestic light. However, blue aureoles (indicative of celestial glory) would also be relatively common.

Mandorlas, on the other hand (also known as “almonds,” mandorla meaning precisely that in Italian) are a kind of aureoles that are almond-shaped. In the mandorla, Ferguson continues, “the extended rays of the aureole are enclosed in an almond-shaped framework that surrounds the body of the person depicted.” Most of the time, mandorlas are given to Christ in images of the Last Judgment and, on some other occasions, to the Virgin Mary (as in, for example, representations of her Assumption).