You too will die: This Portuguese chapel is decorated with 5,000 human bones as a helpful reminder

Entire walls of skulls and bones were set up by Franciscan friars to remind us of the inevitability of death.

Many medieval churches host spooky collections of bones, also known as “ossuaries,” from the Latin “ossum” (bone). But none can perhaps rival the eerie decoration of the Capela dos Ossos, literally Chapel of Bones, a small chapel in the Portuguese city of Evora adorned with 5,000 bones. 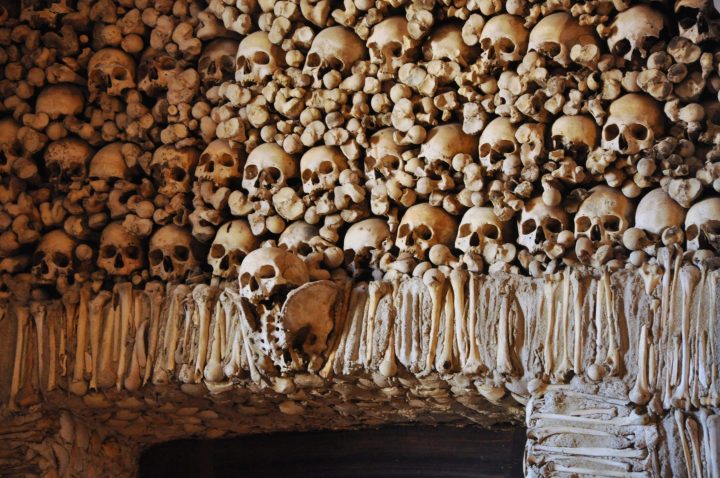 Located in the larger Royal Church of St. Francis, the Chapel of Bones was created in the 16th century after local cemeteries were running out of room to bury corpses.

Rather than simply finding new burial ground for departed believers, the Franciscan friars who were running the Royal Church of St. Francis decided to set up an eerie design intended to remind visitors about the inevitability of death, a memento mori. Visitors stepping into the chapel are literally surrounded by bones: lines of skulls decorate its walls while a mix of arm bones and leg bones make up its columns. And indeed bones are the focus of the sentence engraved on top of the marble entrance to the cave: “Nós ossos que aqui estamos, pelos vossos esperamos,” or: “We bones are here, waiting for yours.”

In order to understand the intentions of Franciscan friars it is useful to look into the history of Evora. During the 16th century the town was enjoying a period of relentless growth thanks to the establishment of trading routes with Portuguese colonies in South America. Many local citizens were suddenly more interested in wealth than faith.

For this reason, Franciscan friars decided to create a place that could invite reflection about the inevitability of death and its implications for our behavior as Catholics during life. This intention is encapsulated in a poem written by Father Antonio da Ascenca, which still hangs from one of the pillars:

“Where are you going in such a hurry, traveler? Pause … do not advance your travel; You have no greater concern Than this one: that on which you focus your sight. Recall how many have passed from this world, Reflect on your similar end, There is good reason to reflect If only all did the same. Ponder, you so influenced by fate, Among all the many concerns of the world, So little do you reflect on death; If by chance you glance at this place, Stop … for the sake of your journey, The more you pause, the further on your journey you will be.”

As Catholics all over the world approach the feast of All Saints Day, this poem stands as a powerful reminder of the importance of living our life with purpose and faith. The Chapel of Bones is open every day from 9:00-12:50 and from 2:30-5:45. Evora can be reached from Lisbon by train (estimated 2 hours journey) for €24.80.