Roofer gives an elderly woman a new roof by “tricking” her 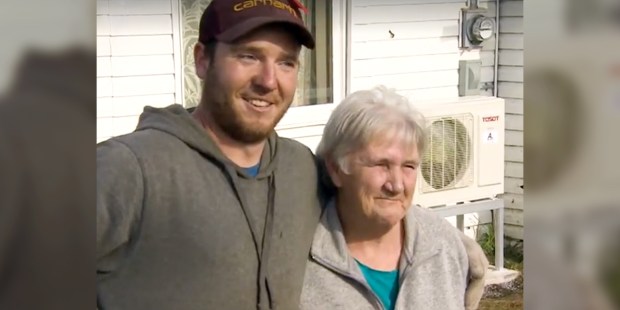 A story proving that the true measure of a man has nothing to do with profits.

Jeremy Locke, 25, has his own roofing company in Bridgeport, Nova Scotia. For a couple of years before he began his business, he would drive past the home of Jeanette MacDonald, noticing the terrible state of her roof. He was concerned — not just for the elderly woman, but the children he believed were living with her. The blue tarpaulin that had remained nailed to the roof was the only thing keeping MacDonald and her family from the harsh winter elements. So Locke decided to lend a helping hand.

The young man knocked on MacDonald’s door and offered to fix her roof for nothing,”I didn’t know who the woman was, but I wanted to take care of this for her and her grandchildren,” he explained to The Chronicle Herald. However, despite his kind gesture, the grandma said she’d applied for a grant and politely turned him down.

MacDonald and her plight left an impression on Locke. He saw similarities between the woman and his own grandmother, and couldn’t bear to see her in this situation. He had also grown up without much and felt that he could use his skills to help.

A year after Locke started his own business, seeing that the roof was still in a state of disrepair, Locke returned to MacDonald’s home and asked MacDonald if she wanted to enter a raffle his company was doing for a free roof. The 70-year-old jumped at the chance, but little did she know that there was no competition. Locke shared the reasoning behind his tactics: “I think these things should be gifted to people who truly deserve and need it.”

Locke ended up taking the time to explain his concerns for MacDonald and her family and she gratefully took him and his team up on their generous offer. The mom-of-two and grandmother to seven had single-handedly raised her kids, and left her job to care for her grandchildren, four of whom still  live with her. Living on a state pension, she warms her home with a wood stove and had been trying and halt potential flooding during rain storms with pots and pans scattered around the home. Although her grandsons tried to help out with makeshift repairs, the job was too much for them.

MacDonald’s relief following Locke’s kindness is immeasurable: “I could win $1 million and it wouldn’t make me as happy as knowing I’m getting a new roof on, Jeremy is really something. He’s a guardian angel sent from God.”

The job should cost about $9,000 in terms of materials and manpower, but the only thing Locke wants in return is a home-cooked meal for his crew from the woman who reminds him of his grandma.

Read more:
It’s easier to be kind if you possess this one thing …