Louvre exhibit has most da Vinci paintings ever assembled 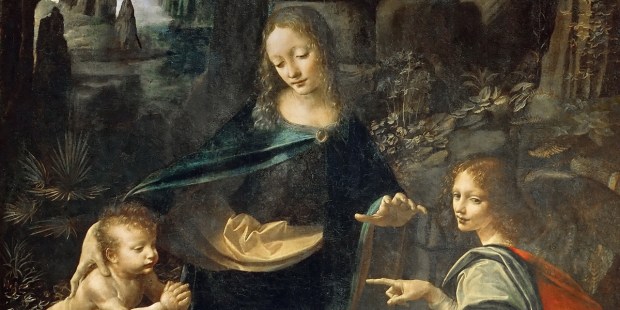 A 500th anniversary should be an extravagant feast. For Leonardo da Vinci, it has to be a feast for the eyes.

That’s why the Louvre Museum brought together as many works by the Renaissance master as they could, including one that is so fragile that a lawsuit nearly prevented its loan to the Paris show.

The Louvre’s exhibition is the largest-ever collection of works by da Vinci and includes more than 100 paintings, drawings and manuscripts. Da Vinci was a perfectionist, so he completed only about 15 paintings in his 67 years. This exhibit has 11. That’s the most ever brought together in one place (the Louvre owns five of them).

But while paintings such as the “The Virgin of the Rocks” are drawing crowds, the drawings and notebooks on display are worth studying as well, says da Vinci biographer Serge Bramly: they give visitors a vivid sense of how Leonardo worked.

“You can really get into his brain and try to see how he thought,” Bramly told National Public Radio. “For example, some of the drawings are really impressive because on the same page, you have geometry, machineries, antiques. There are some clouds in the corner. There is an eye. You can find very small horsemen fighting. Everything on the same page. And that’s the way he used to think and work — doing everything at the same time.”

One of those drawings, “Vitruvian Man,” is familiar to people from posters and t-shirts. It resides permanently in a climate-controlled vault at Venice’s Gallerie dell’Accademia. An Italian cultural heritage group sued to keep the drawing, which shows the anatomy of a man’s body, from traveling to Paris because it is so fragile. But an Italian court allowed the loan to go through just a few weeks before the Louvre exhibition opened, NPR reported.

The Mona Lisa is not part of this show. With nearly 30,000 visitors a day, it would have been impossible to include her. So the painting hangs in its usual Louvre gallery.

For those who may be wondering why such a large exhibition is in France, rather than Leonardo’s native Italy, it was in France that da Vince died in 1519. He had been invited by King Francis I to help build a new French capital at Amboise in the Loire Valley. He is interred in a chapel there.

The Louvre exhibit will end in February.