The colony of German Catholics petitioned the bishop of Baltimore to send them a priest.

Someone was wielding an axe. The sound was a primitive bell, ringing out, leading the horseback-riding missionary to the settlement he had been looking for. In September 1808, the Dominican missionary Edward Dominic Fenwick, O.P., arrived in central Ohio, having found the 40 or so pioneers who had written the bishop of Baltimore, pleading with the bishop to send a priest to minister to their spiritual needs.

Fr. Fenwick, a native of Maryland, had recently established the Dominican Order in the United States. Accompanied by just three other friars, Fenwick had arrived in Springfield, Kentucky, in 1806. The friars began building their church, dedicated in 1809, and a men’s college, which was finished in 1812. 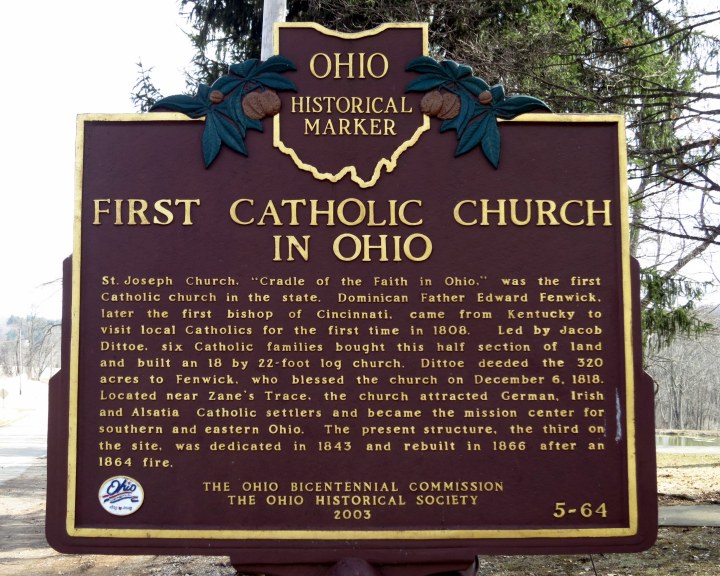 By 1808, Fenwick began to receive letters from Bishop Carroll concerning the needs of Catholic settlers in Ohio. The historian V.F. O’Daniel describes Fenwick’s labors: “In Kentucky he had practically lived in the saddle for seven or eight years, going from place to place ‘in search of stray sheep,’ to employ a phrase that has been canonized from its use by the saintly apostle of Ohio.”

In a letter to an English friend, Fenwick describes his missionary journeys, saying, “It often happens that I am compelled to traverse vast and inhospitable forests wherein not a trace of road is to be seen. Not infrequently, overtaken by night in the midst of these, I am obliged to hitch my horse to a tree and, making a pillow of my saddle, recommend myself to God and go to sleep with bears on all sides.” Traveling the expanse of unsettled lands, Fenwick lived St. Dominic’s zeal to preach, heading fearlessly into the wilderness.

Despite facing enormous difficulties, Fenwick’s efforts were not without some success. Fenwick shared with a friend,

A short time ago, a colony of thirteen families, having by chance found a Catholic book, conceived the desire of embracing our holy religion; and although I was three hundred miles away, they wrote me a letter, in which they made their desire known to me. I made my way to this colony, which I had the good fortune to find, instructed them all in those things that are necessary to be known, and had the consolation of baptizing them.

According to Fenwick’s estimates, by 1818 Ohio was home to some 3,000 Catholics, without a single priest to minister to them.

Jacob Dittoe, a German-Catholic who had petitioned the bishop to send a Catholic priest to his community, would host Fr. Fenwick a few times a year for the next 10 years.

Upon Fenwick’s arrival, Dittoe joyfully set out to build Ohio’s first Catholic church. O’Daniel describes the simple structure, saying, “[It] was a log cabin twenty-two feet long by eighteen in width, and of the same character as the ordinary home of the pioneer settlers of the country. The bare ground served as a floor, while an opening in each side-wall answered for windows. Means of heating in the winter it had none.”

Fenwick, assisted by his nephew—the newly ordained Nicholas Dominic Young, O.P.—dedicated the unornamented structure under the patronage of St. Joseph on December 6, 1818. The Dittoes were even able to provide a house for the Dominicans, erecting a log-cabin convent that became a welcome respite for weary missionaries.

Within a few years, the neighborhood around St. Joseph’s, which had boasted just six families at the church’s dedication, increased tenfold. In November 1821 the little church was expanded with a stone addition at one end.

Fenwick would go on to become the first bishop of Ohio, ordained bishop of Cincinnati in January, 1822.

St. Joseph’s, for its part, became a center of Catholic life. The Dominicans would establish the province’s novitiate and seminary, successively, at St. Joseph’s. Between 1845 and 1939 some 150 Dominican friars were ordained priests at St. Joseph’s. Today, St. Joseph’s parish boasts a handsome Gothic church in service since its dedication in 1843.