When the Knights sent a Christmas ship to fight Bolshevism 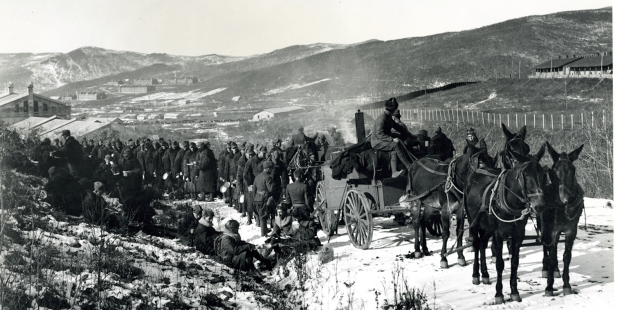 Following the end of World War I, Americans were fighting the Bolsheviks on two fronts: the Polish-Soviet War and the Russian Civil War.

The American Expeditionary Force (AEF) journeyed to the Siberia’s frozen tundra to support allies of ousted czar, Nicholas II — an ally in the First World War until he overthrown by the Communist Bolsheviks during the October Revolution. Meanwhile, a hundred members of the United States Air Service — led by then-Colonel H.S. Howland — volunteered to repel the Communist Bolsheviks from advancing further into Eastern Europe with Polish forces.

At the time, the Knights of Columbus Supreme Council regarded Bolshevism as a power of “darkness and distress” and launched an educational program against the ideology. A Knight and Hollywood actor, Garry McGarry, traveled to Vladivostok and discovered the town, with over six thousand American troops, lacked supplies and entertainment. He requested the Knights of Columbus War Activities Committee to send “Caseys” — K of C war secretaries — overseas.

The Supreme Council not only sent Caseys, but also dispatched a “Christmas Ship.”

Like their service in WWI, the Knights of Columbus kept a “constant stream of creature comforts” as well as “pouring men and supplies” in order to strengthen the morale of the American fighters in Poland and Siberia.

The ship, which sailed from New York to Vladivostok in November 1919, was loaded with “several thousands of dollars worth of supplies.” It included flour, cigarettes, candy, crackers, chocolate, mittens, athletic equipment, woolen mufflers and Christmas cakes and doughnuts. It also had “cinema and theatrical supplies” so McGarry could perform shows for the troops.

Upon their arrival, the Caseys played the role of Santa Claus, traversing from 350 to more than 2,000 miles across the frozen terrain to distribute the necessities. They even had “rolling kitchens” — one was a mule-drawn wagon loading with food and other items to serve troops located in remote posts.

On the western front, in Poland, the Knights collaborated with the Republic of Poland’s Prime Minister Ignace Paderewski to bring relief to the 20,000 American-Poles enlisted in the Polish-Soviet War, sending “ten carloads of material under convoy of fifteen secretaries.” The Knights of Columbus fully equipped Colonel Howland’s men and also sent supplies to 5,000 men in Silesia who were providing “police work in connection with the elections there.”

William Larkin, overseas director for the Knights of Columbus, stated that “The Knights of Columbus can now go on record in their fight against the menace of Bolshevism” and was told by Colonel Howland that his men called themselves “The Casey Platoon” in honor of the Knights’ commitment to the cause of limiting Bolshevism’s grasp on the European continent.

As stated in the March 1920 edition of Columbiad — the predecessor to Columbia — the Knights and Caseys were everywhere “watching for a chance to serve.”

While the Bolsheviks sued for peace, ending the Polish-Soviet War, they were victorious in the Russian Civil War solidifying communist rule in the new Soviet Union. But the Knights continued to speak out against the Soviet Union’s persecution of Christianity, and still speak out and advocate for the protection of persecuted Christians around the world today.

Learn more about the Knights here.