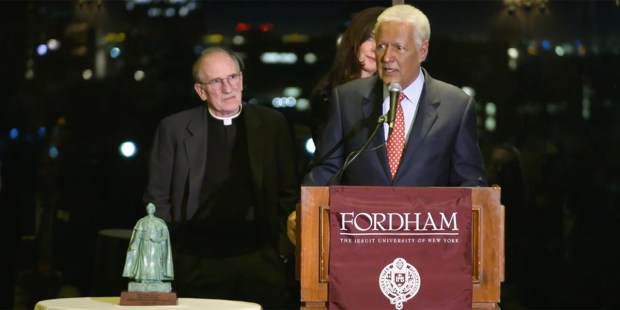 Fordham University has honored Alex Trebek with the Fordham Founder’s Award. The accolade recognizes individuals whose personal and professional lives reflect the highest aspirations of the University’s defining traditions, as an institution dedicated to wisdom and learning in the service of others.

Before handing the award off to the Trebek and his wife Jean, President of Fordham University Father Joseph M. McShane called Trebek “the Nation’s Schoolteacher,” citing his 36-year stint as host of Jeopardy! The Jesuit priest went on to praise the show, suggesting that the trivia-based game show encourages education.

Even though Trebek, 79, has been battling stage-4 pancreatic cancer, he came out to the ceremony to accept the award. According to the Archdiocese of Baltimore’s website, Trebek addressed the crowd about the importance of prayer. He said:

The Trebeks have long been supporters of Jesuit-run schools, having sent both their son and daughter to Jesuit colleges. In 2015, the couple established a $1 million scholarship to aid students of Harlem who wish to attend Fordham and in 2019 they doubled down, establishing a second, equal scholarship to help more students in need.

Trebek was joined at the podium by his wife, Jean, who spoke on the importance of education. She said:

“Once we are allowed to have the support that leads to an educated mind, that mind has the opportunity to be open and curious which allows for a fuller understanding and appreciation of our humanity both individually and collectively.”

Although Trebek is going through the immense ordeal of chemotherapy, he has not made any hints that he expects to step down from his job at Jeopardy! In fact, in the two days preceding the ceremony, Trebek was in the studio recording new episodes of the famed trivia game show.

Crux Now reports that after the acceptance speeches, Father McShane retook the stage and led the entire 275-person gathering in the Lord’s Prayer for Trebek. Although he is weakened by his cancer treatments, Trebek reportedly had no trouble lifting the 20-lb. award statuette of Fordham’s founder, Archbishop John Hughes.