San Francisco event draws thousands of people to march for the cause of life.

At the 2019 Walk for Life West Coast, a group of seven pregnant women got up on a stage in San Francisco’s Civic Center Plaza, held fetal heart monitors attached to bullhorns to their bare bellies, and broadcast their babies’ heartbeats to the crowd. 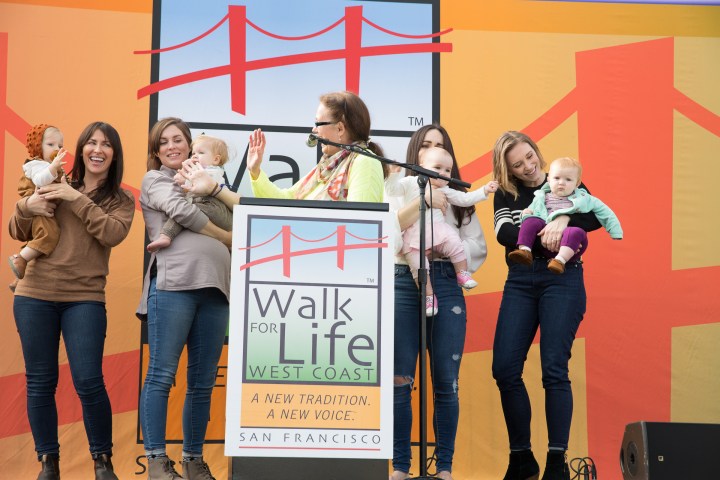 Last Saturday, several of those women held those very same babies in their arms, as a gathering of thousands cheered.

There were only four mothers and babies because two of the moms were out of town speakers at last year’s event and were not present this year, including Abby Johnson, author of Unplanned, and Patricia Sandoval. The other mother had moved out of state.

Nevertheless, Walk for Life West Coast co-founder and organizer Eva Muntean reminded the crowd that last January it would have been “perfectly legal” to abort the babies whose heartbeats reverberated across the Civic Center Plaza and whose cute faces now graced the stage.

Before the 16th annual Walk for Life proceeded down San Francisco’s Market Street, a woman named Kathleen Folan gave her testimony about being raped in college. Although she knew that her resulting pregnancy would put an end to the plans she had for her life, she immediately recognized the intrinsic dignity of the child she bore in her womb.

“Many people, even pro-life people, say exceptions should be made in the case of rape,” Folan said. “As a mother, this offends me so much.” Referring to Nathan, the son she gave up for adoption, she asked, “Why is his life worth any less than mine? Why should he be punished to death for the crime of another? He is an incredible human being who has blessed so many.

“Some say that I shouldn’t have been forced to go through a pregnancy that was through no fault of my own,” Folan continued. “I say, ‘Choose life! Because giving birth to him is what healed me. Giving birth to Nathan did not destroy my life, as the abortion side would like you to think is the only outcome, but gave reason to a painful experience. He is the beauty that came out of a very dark place.”

Folan then asked Nathan, now 28, to come up on the stage. Referring to those who say they are against abortion except in the case of rape (or incest), Nathan said, “I want everyone to realize, especially the ‘excepters,’ that you’re talking about me, and everyone like me. Life is life: no exceptions.”

Muntean also related a story about a man named Michael who had lost three children to abortion.

“Michael heard about the Walk in 2011 and he has walked with us every year since,” she said. “He started by himself carrying a handmade Walk for Life sign as a way to come to terms with his own abortions.”

“Those around him probably wondered what he was doing, but each year he shared his experience, and more and more men decided to join him,” she said.

This year, about 70 men walked with him. But, Muntean said, “All of this is happening in the California Prison System, where Michael is serving a life sentence. … This year, Michael has organized enough men to walk in four of the yards at Valley State Prison.”