Next to the leaning tower of Pisa stands a Catholic wonder

Built in 1092, Pisa’s cathedral is a unique testament to the city’s varied history.

We all know the Italian city of Pisa for its iconic leaning tower. But right next to one of the symbols of Italian architecture stands a stunning cathedral that should not be missed by Catholic travelers. Pisa’s Duomo was completed in 1092 and remains one the most impressive examples of Pisan Romanesque, a local subgenre of Romanesque architecture. 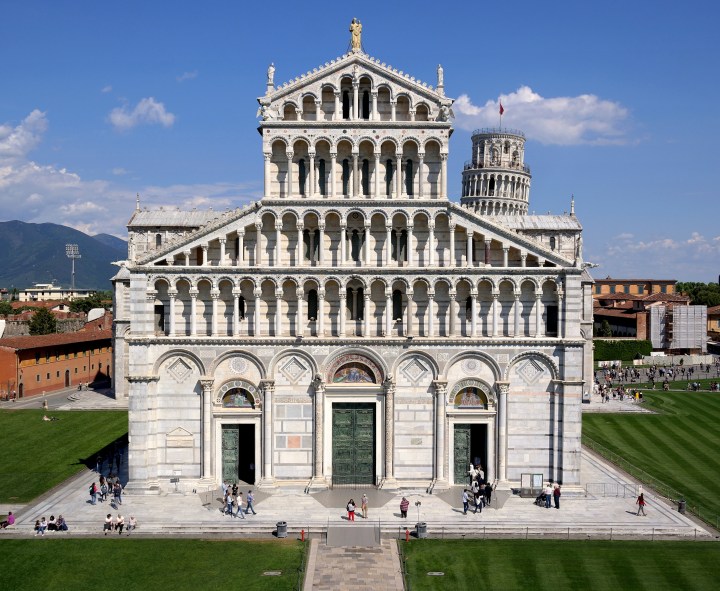 The cathedral’s roots go back to early medieval times, when Pisa was a flourishing Maritime Republic competing with Venice for its leading role as Italy’s leading trading harbor. The two cities started construction of their respective cathedrals nearly at the same time and entered a playful competition as to which one would be able to built the most outstanding place of worship. Venice started building the world famous St. Mark’s Basilica. Pisa started to build its Duomo, which was commissioned to architect Buscheto in 1063. It took 30 years to complete the structure, which was partly ornamented with spoils gathered while fighting Muslim invaders in Sicily. It was erected outside Pisa’s medieval walls, on the site of a pre-existing Lombard necropolis, to show defiance against potential attackers.

At the time of its completion in 1091, the cathedral was considered one of the most innovative structures of its time, featuring elements of Lombard-Emilian, Byzantine and Islamic architecture. Initially called Santa Maria Maggiore, it later took on the name of Santa Maria Assunta. It was consecrated in 1118 by Pope Galasius II.

Its exterior decorations feature white, pink and gray marble, mosaics and many bronze objects taken from southern Italy. Blind arches with lozenge shapes are an influence of Armenian architecture. The heavy bronze doors are decorated with 24 reliefs depicting scenes from the New Testament, a feature typical of Byzantine architecture. The majestic Corinthian columns between the nave and the apse, sculpted from granite monoliths, come from the mosque of Palermo. The Oriental looking lamp at the center of the nave is called “Galileo’s lamp,” because according to a tradition it was here that the scientist developed his theory of time while watching the lamp swinging from the nave (the actual lamp he observed is preserved in the cemetery).

The apse features a large mosaic by Italian sculptor Cimabue depicting Christ enthroned between the Virgin and St. John. The use of lancet arches and an elliptical dome produced a grand  effect similar to that of mosques, while the two raised female figures sculpted from granite in the nave are of Byzantine influence.

The pulpit is home to another masterpiece, this time by Giovanni Pisano, that artfully sculpted episodes of the life of Christ over curved panels. But visitors should not forget to look down as well as up. One of the most outstanding features of the cathedral is its “cosmati” stonework, where elegant geometric patterns were created with inlaid marble.

St. Rainerius, patron saint of Pisa, and Henry VII, Holy Roman Emperor, are among the notablesburied in this stunning structure. Many waves of restoration followed since the cathedral’s foundation in 1091, with major changes introduced after a heavy fire destroyed part of the cathedral in 1595. This, coupled with the architectural melange of its original design, makes Pisa cathedral a unique testament to Pisa’s varied history and the many outside influences exerted over its architects throughout the centuries.

Pisa’s cathedral is open to visitors every day from 10 a.m. to 7 p.m. You can’t miss it, it’s right behind the famous leaning tower.

Prayer for this evening
Top 10
1
Bret Thoman, OFS
What Padre Pio saw in the Spanish Flu of 1918
2
Annalisa Teggi
Amputee from the waist down is thankful every day to be alive
3
Zelda Caldwell
Mystery of crosses on walls of Church of the Holy Sepulchre may h...
4
Philip Kosloski
Padre Pio’s favorite prayer of petition
5
Philip Kosloski
St. Padre Pio: His life, his miracles and his legacy
6
Philip Kosloski
Catholic prayers for strength
7
Cerith Gardiner
7 Joys to be had from a lengthy marriage
See More
Newsletter
Get Aleteia delivered to your inbox. Subscribe here.