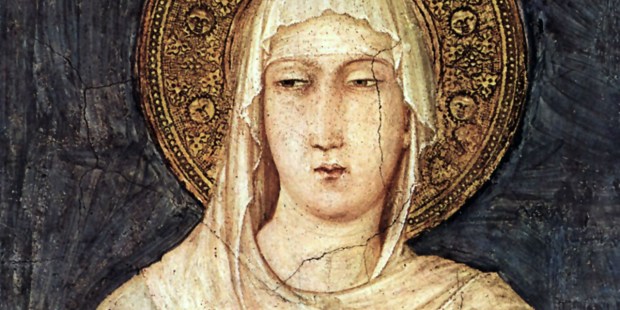 St. Clare of Assisi was saddened that she couldn’t attend Mass, but God provided a unique way she could attend from her room.

St. Clare of Assisi was heartbroken that she couldn’t attend Mass because of an illness that confined her to her room. She had a deep love of the Eucharist and longed to see the divine celebration that was occurring nearby.

According to various stories, God had mercy on her situation and allowed a miraculous projection of Mass on the wall of her room. She could see the images of Mass and hear the songs being sung, as if she were present at Mass.

Interestingly, this is the very reason why Pope Pius XII proclaimed St. Clare “patroness of television” in 1957.

If you are stuck at home and unable to attend Mass, you are not alone! Many of the saints had the same problem and in some cases, were able to watch the Mass from afar.

Read more:
Can’t receive the Eucharist? Here’s how to make a spiritual communion