There’s a lesson we need to learn from the Carthusians, especially now 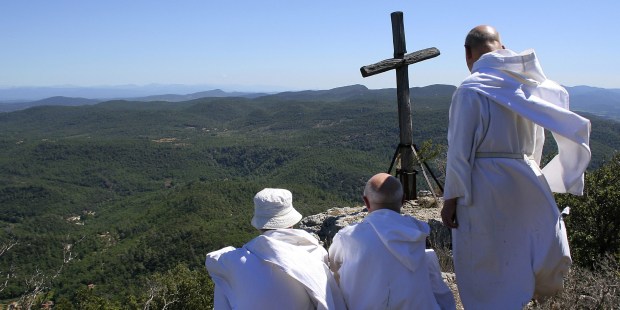 Even when everything was falling apart, the monks remained steady in glorifying God.

As a Jesuit novice almost two decades ago, after my 30-day Ignatian silent retreat, required of all first year novices, I was sent to a monastery for two weeks. The novice director explained to us that in the past after the long retreat, some novices had felt tempted to leave and become monks. Before joining the Jesuits, I for one wanted to become the kind of monk who made jam and coffins. By sending the novices to monasteries, the novice director was quite certain that the men zealous for the voluntarily quarantined life would beg to return back to Jesuit life. And he was right.

In the monastery where I stayed for two weeks, there was a loud, electric school bell that rang like it was the end of the world before each of the eight prayer periods when the monks gathered to chant the Divine Office. After the first few days, I stopped attending most of the prayer periods and wanted to take a hammer to those bells.

Yet, over the years and especially during these uncertain times of global pandemic lockdown, I have continued to be enamored with a specific group of monks founded by St. Bruno in 1084 — the Carthusians, one of the most austere monastic orders in the Catholic Church. After all, the founder of the Jesuits, St. Ignatius of Loyola, after his conversion also wanted to join the Carthusians. In fact, St. Ignatius borrowed many ideas from Carthusian constitutions and spirituality in establishing his own order of contemplatives in action.

Indeed, there is much to learn from monastic orders like the Carthusians. Catholics under quarantine are turning to monastics, monks and nuns, to learn how to settle into a life of stability within a world in crisis, and also within a house with children and pets running around all day. The contemplatives teach us to praise God in all circumstances and at all times, to find abundance in scarcity, and solidarity in solitude. These days, I find the Carthusian motto particularly comforting: Stat crux dum volvitur orbis (“The Cross is steady while the world is turning”).

Read more:
Wondering about how to handle life at home? Contemplative monks and nuns have some advice

However, there is an overarching life lesson that we often overlook: the monastics teach us how to die. It’s no exaggeration to say that the Carthusian monks, for example, live as if they were already dead. In other words, by their radical renunciation of worldly attachments, they practice living life in Heaven — life with God — on Earth.

For centuries, the structure of their daily life has remained relatively unchanged. Their day spent mostly in silence is divided into about nine scheduled prayer periods with time for Mass, meals, manual labor, study, and recreation. After the bubonic plague (“Black Death”) that killed almost a thousand Carthusians, the turbulence of the Protestant Reformation, the persecution during the French Revolution, the destruction following two world wars, Carthusian life and prayer over nine centuries has remained relatively constant and unchanged up until today. Even when everything was falling apart, the monks remained steady in glorifying God. They resisted destruction and despair by continuously dying to self and living in God’s presence.

Carthusians seek to die as they live — a life known only to God and their brethren. For example, if a Carthusian publishes a work before he dies, he attributes the work to “a Carthusian monk” for the author. He is to shun all honors and positions of power within and outside of the monastery. When he dies, his body is laid directly into the ground without a coffin and marked with only a cross without a name written on it. There is a saying that a Carthusian ought to “be a saint rather than be called one.” For this reason there are probably no more than 16 officially canonized Carthusian saints all together. Following Christ’s example, the Carthusian is to always point to the Father.

In Mitch Albom’s Tuesdays with Morrie, Morrie’s most memorable line sums up what monastics witness to the world: “The truth is, once you learn how to die, you learn how to live.” Regardless of what state of life we’re in, we can join the contemplative monks and nuns in “[dealing] with the things of this passing world as to hold rather to the things that eternally endure” (Lenten Preface II).

In the next life, what is constant will be our praise of God with our whole self. That praise begins here and carries over into the next life. God who is constant in His love and providence knows the heart of His creatures and always keeps His word. And everything else will pass away.