Vatican Museums unveil paintings newly determined to be by Raphael 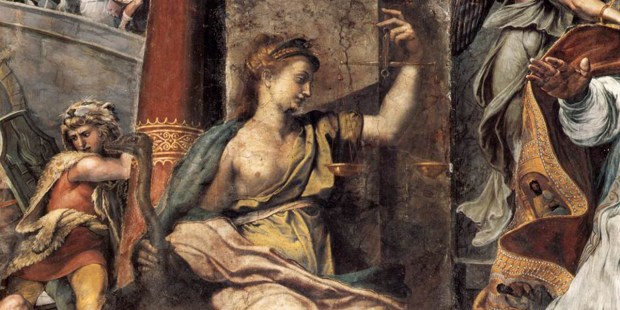 Art institution hopes to share with public what has so far been viewed by only a handful of people.

When the Vatican Museums reopen this year, visitors will be able to see the work of a Renaissance master in a new light.

Two paintings by Raphael that were previously thought to be those of his students were unveiled last week in the Vatican’s Hall of Constantine. The paintings are allegorical depictions of the virtues of Justice and Friendship and bear their Latin names, Iustitia and Comitas. According to Vatican News, the frescoes likely represent the last works of Raphael before his death in 1520.

“The exceptional discovery is the result of a careful restoration begun in March 2015,” Vatican News reported. “Restoration work has so far been executed on three walls of the great hall.”

The paintings, which measure about 59 by 39 feet with a height of about 43 feet, were meant to be unveiled on April 20 during an international conference to celebrate the 500th anniversary of Raphael’s death. Due to the coronavirus emergency, the event was cancelled. Instead, the paintings were unveiled May 13 in the presence of the director of the Vatican Museums, Barbara Jatta, and about 20 other people, including technicians and experts.

The private ceremony was the culmination of five years of restoration efforts on the part of the Restoration Laboratory of the Vatican Museums with the support of the Patrons of the Arts. Francesca Persegati led the team, composed of experts coordinated by Fabio Piacentini under the scientific direction of Guido Cornini.

Piacentini told  La Stampa in 2017 that he could see the “intervention of the master” as he cleaned the paintings.

“We find ourselves in front of a painting done in oil on the wall, which is a very particular technique,” Piacentini said. “Having carried out the first cleaning tests and removing all the overlapping substances over the centuries during the oldest restorations, the preciousness of the painting and the typical pictorial trait of the master emerges. The technique adopted is the one that Raphael had developed for the decoration of the entire room. On the wall he applies a sufficiently thick layer of a natural resin also known as Greek pitch, and on that he then painted as if it were a painting on canvas, or even better on a panel.”

Arnold Nesselrath, delegate for the technical-scientific area of ​​the Vatican Museums, confirmed what Piacentini said. “It was known from the 16th-century sources that Raphael … had two tests in oil technique in this room. These two figures are in fact painted in oil, as the sources say, and are of a much higher quality than what is around them. Raphael was a great adventurer in painting, he always tried something different. When he understood how something worked, he felt the next challenge. And so, when he arrives in the largest room of the pontifical apartment, he decides to paint this room in oil. He managed to paint only two figures, and the students then continued in the traditional method and left only these two autographed figures of the master.”

Vatican News said that the “peculiarity of the [paintings] lies in the technique employed: oil painting on bare wall.”

Beneath the wall’s surface, numerous nails were discovered which anchored a layer of rosin, or Greek pitch, to the wall. Raphael spread the material on the wall while hot and then covered it with a thin layer of white plaster, to prepare for the application of the paint.

The Medici Pope Leo X commissioned the Hall of Constantine for meetings with diplomats. The Vatican Museums website tells us that the hall was decorated by “the school of Raphael, who executed the paintings based on the artist’s sketches after his death. Scenes from the life of Constantine, who gave Christianity its legal standing in the Roman Empire, are flanked by portraits of popes and depictions of the virtues.

Though no date has been announced, the Museums are hoping to reopen soon, with certain measures in place meant to prevent the spread of the novel coronavirus that has devastated Italy. St. Peter’s Basilica reopened to the public Monday.

But when the museum does open, visitors will be able to appreciate “all the iridescent, transparent, and nuanced beauty created by the Italian Renaissance master,” Vatican News said.

The restoration of the Hall of Constantine will continue with the fourth and final wall, where the disciples of Raphael Sanzio painted “The Donation of Rome,” Vatican News said.