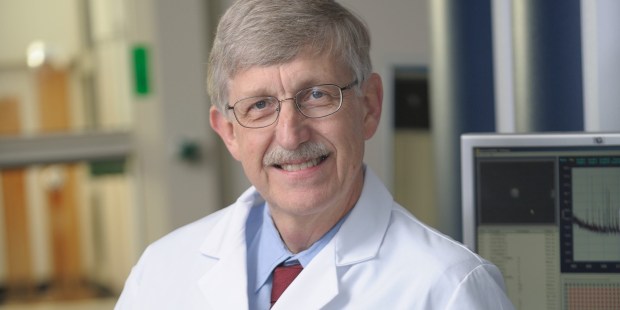 Templeton Prize for 2020 goes to man who led mapping of the human genome.

Ever since the Templeton Prize was established in 1972, it has honored individuals whose work has yielded new insights about religion especially through science. Winners have come from all major faiths and dozens of countries and have included Nobel Prize laureates, philosophers, theoretical physicists, and one canonized saint — Mother Teresa.

This year’s winner, announced today, is Francis S. Collins, director of the United States National Institutes of Health. Collins, a Christian, led the Human Genome Project to its successful completion in 2003 and throughout his career has advocated for the integration of faith and reason, according to the Templeton Foundation.

Collins was appointed to the Pontifical Academy of Sciences by Pope Benedict XVI in 2009 and remains a member.

“In his scientific leadership, public speaking, and popular writing, including his bestselling 2006 book, The Language of God, Collins has demonstrated how religious faith can motivate and inspire rigorous scientific research,” said the Templeton Foundation, named for investor Sir John Templeton, who died in 2008.

“This book argues that belief in God can be an entirely rational choice,” Collins wrote in his book, “and that the principles of faith are, in fact, complementary with the principles of science.” He endeavors in the book to encourage religious communities to embrace the latest discoveries of genetics and the biomedical sciences as insights to enrich and enlarge their faith.

Collins, 70, was selected as the 2020 Templeton laureate late last year, but the announcement was delayed due to the COVID-19 pandemic.

In a statement prepared for the announcement, Collins said: “As I write this, almost my every waking moment is consumed by the effort to find treatments and a vaccine for COVID-19. The elegant complexity of human biology constantly creates in me a sense of awe. Yet I grieve at the suffering and death I see all around, and at times I confess I am assailed by doubts about how a loving God would permit such tragedies. But then I remember that the God who hung on the cross is intimately familiar with suffering. I learn and re-learn that God never promised freedom from suffering — but rather to be ‘our refuge and strength, a very present help in trouble’ (Psalm 46).”

Collins was born in Staunton, Virginia, to parents who sought to raise him in an idealized agrarian lifestyle, homeschooling him until he was 10 on a farm in the Shenandoah Valley. He received a Bachelor of Science in chemistry from the University of Virginia and a Ph.D. in physical chemistry from Yale. A biochemistry course, however, opened his eyes to the revolutionary possibilities emerging in the field, and led him to shift his career path and enroll in medical school at the University of North Carolina in Chapel Hill.

In his youth, Collins wrestled with issues of religion, veering from agnosticism to atheism. But while a third-year medical student serving his residency, he was struck by the power of faith professed by his patients, many of whom faced imminent death. Unable to articulate his own belief, a neighbor, a Methodist minister, introduced him to the writings of C.S. Lewis, the Oxford scholar who himself had tested the tenets of faith through the lens of logic before embracing Christianity. Collins’s journey to Christian belief would evolve and strengthen over the next three decades.