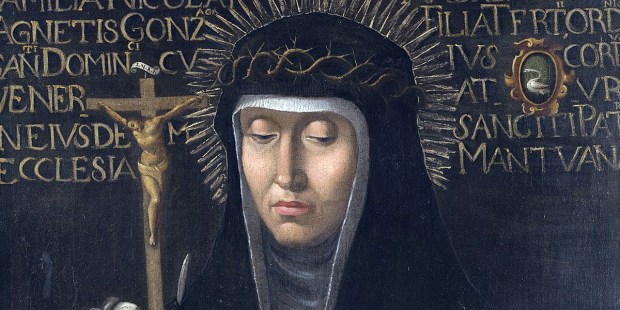 Blessed Osanna of Mantua received the stigmata, but spent most of her life caring for her siblings according to her father’s wishes.

Osanna Andreasi was born January 17, 1449, in Mantua, Italy. Her parents, Niccolo Andreasi and Agnese Gonzaga, belonged to nobility. Just like Catherine of Siena a century before her, Osanna was reported to have had a vision at the age of six. In this vision, Christ appeared to her wearing His crown of thorns and carrying His cross. This vision caused Osanna to consecrate her whole life to following Christ, and he would guide her along every step of the way. She endured much suffering during her life, yet always asked for more:

“O, my only Love! Must the thorns then be for Thee alone; for Thee alone the nails and the cross; and for me sweetness and consolation? Ah! not so. I will not share Thy glory unless Thou make me also share Thy pains.”

Osanna’s father had arranged a marriage for his daughter. Deeply drawn to religious life, she rejected his plans. But she could not make him understand why she would not marry. He believed her stories of visits from Jesus were from her vivid imagination. He was determined to get her married. Since she was the oldest child, he multiplied her responsibilities in caring for her siblings. He made her promise to remain at home until her siblings were all able to live on their own.

Unable to get her father’s approval to enter the religious life, at the age of 14, she began wearing the religious habit of the Third Order of St. Dominic. Catherine of Siena and Friar Girolamo Savonarola, both examples of strict self-denial, had attracted her to this Order.

She had not defied her father by joining the Order but explained to him that she had made a vow and would have to wear the habit until she fulfilled her promise. Her father respected this and allowed her to remain at home.

When Osanna was 18, she had a vision in which she experienced a mystical marriage to Jesus. For the next 12 years, she shared in the sufferings of Jesus. During this time, her parents died, and she assumed the role of “parent” by taking care of her siblings. Ironically, she would wait 37 years to complete her vows. Also, she would care for her siblings until they were all able to leave home.

Legend states that Osanna learned to read and write with heavenly help. It seems that one day she saw a piece of paper with two words on it. Those words were “Jesus” and “Mary.” She immediately knew what the words said, and from that moment on, she could read and write and anything that was written about spirituality she understood.

The apparition she had at the age of six became a permanent reality for her when she was 30 years old. The Stigmata appeared on her head, her side, and her feet. She also had a vision where she saw her heart divided into four parts. From that point on and for the rest of her life, she would experience pains from the Passion of Jesus. She bore the marks of Christ’s Passion on her head, side, and feet but kept them hidden as best she could. However, at times the pain in her feet was so intense she was unable to walk. Through it all, she became a spiritual guide to the poorest of the poor and the beggars for whom she cared. Much of her inheritance she gave to the needy.

Near the end of her life, Sister Osanna became friends with a Benedictine, Father Jerome. They shared many letters, and she refers to him as her spiritual son “conceived in the Blood of Christ.” Her letters detail a spiritual life filled with intense pain and suffering, lessened only by her ecstasies and union with God.

Osanna took her final vows as a tertiary in the Third Order of St. Dominic in 1501. She died four years later.  She was beatified by Pope Innocent XII on November 24, 1694. She is the patroness of school girls.

Prayer of Blessed Osanna of Mantua

O God, giver of all good things,
you led Blessed Osanna to prefer the unsearchable riches of Christ
above all else and to so teach others.
By following her example and teaching
may we grow in knowledge of you
and faithfully live according to the light of the gospel.
We ask this through our Lord Jesus Christ, your Son,
who lives and reigns with you and the Holy Spirit,
one God, for ever and ever.
Amen.

Read more:
5 Saints who received the stigmata of Jesus Christ