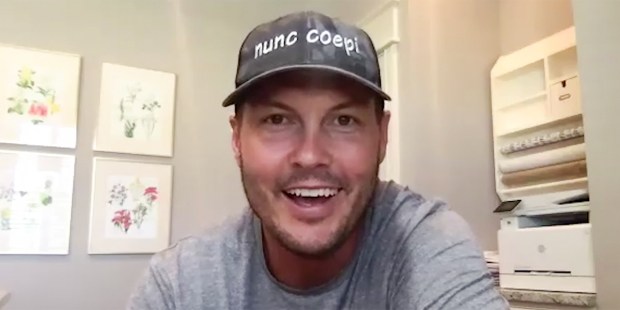 The quarterback dad of nine is keen to bring a 19th-century priest’s inspiration to his family and sporting life.

When Philip Rivers recently signed with the Indianapolis Colts, he didn’t just bring along his football skills, he also brought his “nunc coepi” attitude that is becoming nearly as famous as the dad of nine himself.

The quarterback has spoken quite openly about what the Latin words  — which translate roughly as “begin now” — mean to him, and how that notion of beginning again has been important throughout his football career. However, in a recent remote press conference, the 38-year-old revealed how those two words from the classics can apply just as much to home life as they can to our work.

The origins of “nunc coepi” are said to come from the Italian Catholic priest, Venerable Bruno Lanteri, who at the beginning of the 19th century reportedly said these encouraging words to those who were doing their best but not always making the grade:

Rivers shared in the Zoom meeting with the media how he feels these words are just as inspiring for his kids: “In the classroom, if they are struggling in math or they have a bad test grade, well, ‘Nunc Coepi.'” And for some kids who feel they’re constantly failing or unable to succeed in their goals — whether it’s being good in tests or being nice to their younger sibling — these words can only encourage them to not give up.

It’s also the perfect reminder for kids when they have to reluctantly tidy their rooms, or clear the dishes.

The sports star points out how his favorite phrase can apply to household tasks, too. “I’ve seen it used also like a big stack of laundry or a bunch of dishes in the sink. If you look at the whole big pile, it looks like a lot. But if you just begin again, begin again, being again, and begin again, you look up and then the sink will be clean and the laundry will be folded. So there it is.”

From sporting hero to inspirational dad, parents and kids everywhere can learn from one of Rivers’ life mottoes — “nunc coepi.”

If you’d like to hear Rivers explain himself, go to the 20:00 mark in the video below (here is the link if the video does not play automatically: https://youtu.be/BcUDHrAV1TU):