Orthodox group asks Trump to intervene to “save” Hagia Sophia 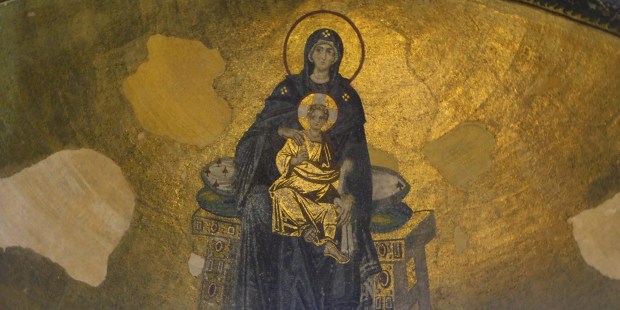 Turkey is gearing up to convert museum, once the cathedral of the Church of Constantinople, into a mosque.

An organization supporting the Ecumenical Patriarchate of Constantinople has asked President Trump to intervene in a case where Turkey might turn a historic Istanbul church building into a mosque.

“An early July court hearing in Turkey will likely declare that the Hagia Sophia in Istanbul should be converted to a mosque,” said a letter to the president, written by Anthony J. Limberakis, M.D., National Commander of the Order of Saint Andrew the Apostle, Archons of the Ecumenical Patriarchate. Limberakis implored Trump to work to prevent “this sacrilegious and unnecessary decision.”

The letter, dated June 17, came as the issue heated up in Turkey and drew increasing attention to the fate of the 6th-century building, which was long the cathedral of the Church of Constantinople. Its history took a turn in 1453, when Mehmed II, having conquered Constantinople, turned the building into a mosque. In 1935, however, under the founder of modern Turkey, Mustafa Kemal Atatürk, it was turned into a museum and it has been so ever since.

“In May, Turkish President Recep Tayyip Erdoğan confirmed he hoped to annul Atatürk’s decree and reopen the monument to Muslim worship,” said Catholic News Service June 18. “Abdulahmit Gul, Turkey’s justice minister, told the Anadolu news agency June 15 that the move was ‘a matter of sovereignty’ and reflected the ‘common wish’ of all citizens.”

In an email to Aleteia, the Roman Catholic bishops’ conference of Turkey confirmed a report that it declined to contest the decision.

“We, as Roman (Latin) Catholic Church, are not officially recognized in Turkey as religious minority,” said Bishop Rubén Tierrablanca González, Apostolic Vicar of Istanbul and President of the conference. “There are three Catholic Eastern Rites Churches that are recognized in their administration, through their Foundations.”

Bishop González said that as the Catholic Church in Turkey, they “don’t want to touch this subject.”

“Going in favor of one or another comment is entering in political issues and for us it is not our interest,” Bishop González said.

The Ecumenical Patriarchate of Constantinople, when contacted by Aleteia, said June 18 that it did not have a comment.

But the Archons’ letter to Trump warned that the plan to turn Hagia Sophia into a mosque directly challenges religious freedom. “It is part of ongoing efforts to delegitimize the remaining Christian population of Turkey, further eroding their religious freedom, and to obliterate a significant element of the Christian heritage of Turkey and the surrounding region, as well as of the entire world,” read the letter, signed by Limberakis. “Converting Hagia Sophia Museum, a UNESCO World Heritage Site, to a mosque would render it the patrimony of one nation, an unjust and provocative act as this historic site truly belongs to the world.”

The Archons are designated by Ecumenical Patriarch Bartholomew for their “outstanding service to the Church,” according to their website. “It is the sworn oath of the Archon to defend and promote the Orthodox Christian faith and tradition. His special concern and interest is to serve as a bulwark to protect and promote the Sacred See of St. Andrew the Apostle and its mission.”

Hagia Sophia “rightly became a museum in 1935, a monument of the human spirit and a living symbol of respect for all faiths,” Limberakis continued. “To convert it into a mosque now would be to repudiate that respect and deny the Hagia Sophia’s origin as a Church dedicated to Jesus Christ and as a sacred place, a part of our collective heritage.”

In addition to the Archons, appeals to Turkey also came from Ukraine and Russia, nations where the Christian Church traces its origin to Hagia Sophia.

“This temple played a crucial role in the history and culture of Ukrainian people,” said a letter to Erdoğan from religious groups in Ukraine. “The Grand Prince Volodymyr accepted Christianity under the impression of stories of his messengers that were mesmerized by this cathedral’s untold beauty. For almost half of a millennium, Hagia Sophia was the main cathedral for our Ukrainian Сhurch. In this very place, generations of our metropolitans received their ordinations. This very temple served as a prototype for our own most sacred cathedral, the Saint Sophia of Kyiv. It was the paragon of countless churches — as well as countless mosques.”

On June 6, Metropolitan Hilarion of Volokolamsk, head of the Russian Orthodox Church’s Moscow Patriarchate department for external church relations, said, “Any attempt to change the present status of Hagia Sophia as a museum will violate the fragile inter-confessional and inter-religious balances which have been established by now.”

Last week, the new Armenian Patriarch of Constantinople proposed that Hagia Sophia be shared by Christians and Muslims as a place of prayer.

That proposal was welcomed  by Cato Institute scholar Mustafa Akyol. “The Armenian Patriarch in Istanbul, @SahakSrpazan, has the right vision for #HagiaSophia that I have been supporting all along,” Akyol commented on Twitter. In 2014, writing in Hürriyet Daily News, he made a similar proposal. There was already talk that Erdoğan, who was then prime minister then, wanted to turn Hagia Sophia into a mosque.

“Once again, the status of Hagia Sophia of Istanbul, one of the most ancient and magnificent shrines on Earth, is being discussed in Turkey,” Akyol wrote at the time. “Some speculate that Prime Minister Tayyip Erdoğan plans to reopen the structure, which has been a ‘museum’ since 1935, as a mosque to consolidate his support among religious conservatives.”

Six years later, those aspirations seem to be coming to fruition.