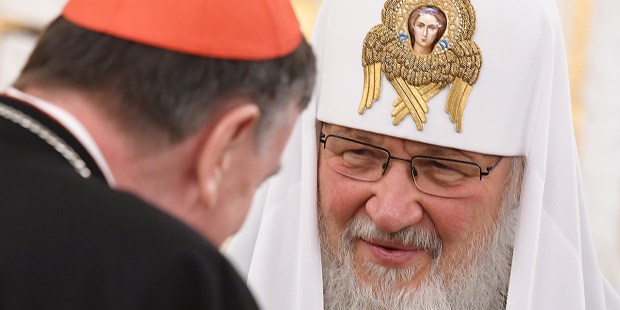 Fr. Jaromir Zadrapa, official of the Pontifical Council for Promoting Christian Unity, in an interview last month with I.MEDIA, said that the great obstacles between Catholics and Orthodox have been resolved during these 60 years of dialogue. For this Czech priest in charge of dialogue with the Russian Orthodox Church, the primacy of the pope remains the main point of discussion between the two Churches and raises the question of the “form” full unity will take.

It’s been 60 years since the Council for Promoting Christian Unity was established. What road remains to be traveled in order to achieve unity?

Father Zadrapa: Over the past 60 years we’ve come a long way: a great deal of work has been done. Since the Second Vatican Council (1962-1965), this work has been carried out in two directions: one towards the West, by addressing our Reformed brothers, and the second towards the East, through dialogue with our Orthodox brothers.

On the theological level first of all and then on the practical level, much has been done. Very few things remain to be done, really. We could summarize this in one sentence: how will this unity be achieved? The only problem is, some ideas about how to achieve this unity are widely divergent and cannot converge.

Read more:
What you need to know about the Orthodox-Catholic split and hopes for reunification

As the person in charge of relations with the Russian Orthodox Church, can you tell us how far we have come and what challenges remain in this area?

Father Zadrapa: In my opinion, all major obstacles between Orthodox and Catholics have been resolved by means of joint declarations. Today we are discussing the question of the primacy of the pope. What form will this take when we are together? These discussions, which are ecclesiological in nature, have been at the heart of our exchanges in recent years.

From a historical point of view, our break-up is 10 centuries old and we’ve been in dialogue by means of this Council for only 60 years. Another remaining problem is that not all the Orthodox Churches have been present in the theological commissions formed since the beginning of this Pontifical Council. The Russian Orthodox Church and the Bulgarian Orthodox Church, for example, are not part of them. It therefore seems difficult to come to conclusions if they lack a voice, all the more so if the conclusions are important. It’s therefore not always an easy discussion, but in the light of history, it’s progressing quickly and we should give thanks to God. The important thing is not to stop the dialogue.

Theologically, could we say that differences over the figure of Mary are no longer on the agenda?

Father Zadrapa: I think this subject is not a problem, although we often consider it as such. Catholics attach a lot of importance to the dogma of the Immaculate Conception, whereas the Orthodox have their eyes riveted on the mystery of Dormition [celebrated as the Assumption among Catholics, editor’s note].

The former look at the beginning of the History of Christianity while the latter look at the end, the future. However, these two visions do not contradict each other; on the contrary.

For me, it’s an exchange of gifts that we can give each other as Christians and which Mother Church has created. These differences can allow for growth. We need each other. The important thing is to create friendship. It’s necessary to purify our memory and continue the dialogue. We think that many things divide us, whereas today there’s almost nothing left, apart from the question of the primacy of the pope, which remains an important point.

It is not possible for a Catholic to receive Communion in an Orthodox liturgy. Can we hope that things will change?

Father Zadrapa: I find that this is really an obstacle, a very sad, very sensitive point. The Russian Orthodox Church allowed Catholics to receive Holy Communion for some years, but this is no longer possible. We’re still discussing this point. However, this question will undoubtedly be the culmination of full communion between the two Churches. I have great hope on this point. We have to be patient and move forward together.

A vademecum (handbook or guide) for bishops should soon be published by the Council for Promoting Christian Unity. What will be its content and what will it be used for?

Father Zadrapa: At the moment, I can’t say much. It will be presented in November (2020) and the pope will comment on it. It will be a document that will be useful to bishops, especially new ones, in order to create communion with all the people in their dioceses, including other Christians and non-believers.

Read more:
In Orthodox iconography, the Virgin Mary is also the Burning Bush