Moroccan Christians have to practice their faith in secret 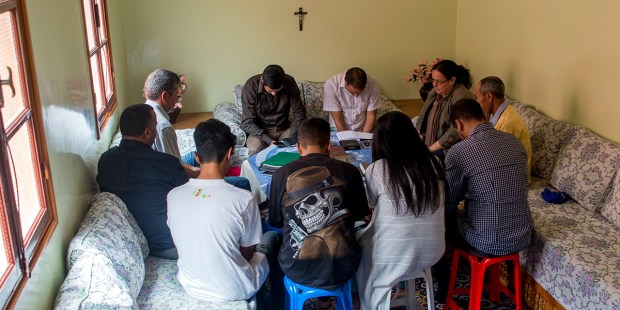 The number of Moroccan Christians is an estimated 8,000, though some sources put that number as high as 25,000.

The Malekite rite of Sunni Islam is the state religion of Morocco, and authorities do not legally recognize followers of any other religions, except Judaism. The 2012 Moroccan Constitution guarantees freedom of worship but it penalizes conversions to any religions other than Islam. That puts the Christian community in a difficult position, Jawad Elhamidy, president of the Moroccan Association of Rights and Religious Liberties, told Aid to the Church in Need (ACN).

There are two Christian communities in Morocco: foreigners who work and live in the country and Moroccans who converted from Islam to Christianity. Moroccan Christians face a grim situation, because only Christian foreigners enjoy freedom of worship, even though they have no legal status in the eyes of the state. There are an estimated 30,000 foreign residents who are Catholic, while 10,000 are Protestant. The number of Moroccan Christians is an estimated 8,000, though some sources put that number as high as 25,000. Morocco has a population of 34.6 million.

There are some 44 churches in the country, which were built during the French protectorate era (1912-1956), some of which have been turned into meeting halls and municipal headquarters. The government does not give permits to build new churches.

“The penal code holds that all Moroccans are Muslims, so those who convert to Christianity face legal problems, beside threats to their security,” Mr. Elhamidy said, adding that “Moroccan Christians worship in secret house churches to avoid state sanctions or harassment from society.” Moroccans do not worship publicly, because they risk being accused of proselytizing if they engage in public expressions of any religion other than Islam.

Foreign clergy, because of fear of being criminally charged with proselytism, are said to discourage Christian citizens from attending their churches. According to Mr. Elhamidy, Church leaders receive a weekly warning from the authorities not to welcome Moroccans, or they will be held accountable for proselytizing.

“If a Moroccan enters a church, one of two things happens; either a policeman sitting in front of the church arrests him or her, or the cleric in charge of the church asks the person to leave, unless the purpose is tourism,” said Mr. Elhamidy.

Also, the government restricts the distribution of non-Islamic religious materials, as well as Islamic materials it deems are inconsistent with the Maliki-Ashari school of Sunni Islam.

Under Moroccan law, proselytizing or converting to another religion is a criminal offence punishable by six months to three years in prison.

ACN’s 2018 Religious Freedom in the World report cites the European Parliament, which “acknowledges that religious freedom is constitutionally enshrined in Morocco but adds that [Moroccan] “Christians and especially Muslims who converted to Christianity face ‘numerous forms of discrimination’ and ‘are not allowed to set foot in a church.’”[

Some Moroccan Christians are arrested three times a week and subjected to bullying and harassment at the police station. For the most part, they are released after interrogation or after they have been put under pressure to return to Islam; those who refuse face insults and abuse, according to Mr. Elhamidy.

When an allegation of blasphemy is made, it can become very dangerous for Christians in custody; there can be violence, and some Christians are held for several days, and police make threats that spouse and children would be arrested, too.

Mohamed Al Moghany is a Muslim man from Al Hajeb city who converted to Christianity; his employer, gun in hand, threatened to kill him. When he filed a complaint with police, he was told to keep quiet about his conversion and threats were made against his family. Six months later he quarreled with his employer again. He was arrested and sentenced to six months in prison. Meanwhile, his wife was interrogated as well.

“The state considers Christianity to be a danger,” Mr. Elhamidy said referring to his association’s monitoring indications of discrimination in the country’s legislation. Researchers found official language referring to “Christian danger” and “the religious entities that threaten the Moroccan nation”—the danger being Muslims converting to Christianity.

There are some 2,400 Jews living in Morocco, with Judaism enjoying full legal recognition. Authorities treat the Jewish community with respect for two reasons—first because it is economically strong, and, secondly, argues Mr. Elhamidy, the government uses its toleration of Judaism to whitewash the abuses targeting other religious minorities.

According to the 2018-2019 report from the Moroccan Association of Human Rights (AMDH) report, there is ongoing denigration of Shia Islam in the media and in Friday sermons. During Ramadan, a teenage girl eating in public was attacked by a bus driver and several young men were arrested and hit with a fine for smoking in public, incidents reflecting an imposition of a conservative strain of Sunni Islam.

This article was first published by Aid to the Church in Need. It is republished here with kind permission. To learn more about the mission of ACN, visit www.churchinneed.org