Once the site of a vibrant Cistercian monastery, Tintern now has the grass as its floor and the sky as its roof.

With green grass for its floors, the blue sky for its roof, and its windows hollowed out, Tintern Abbey in Wales has lots of stories to tell. 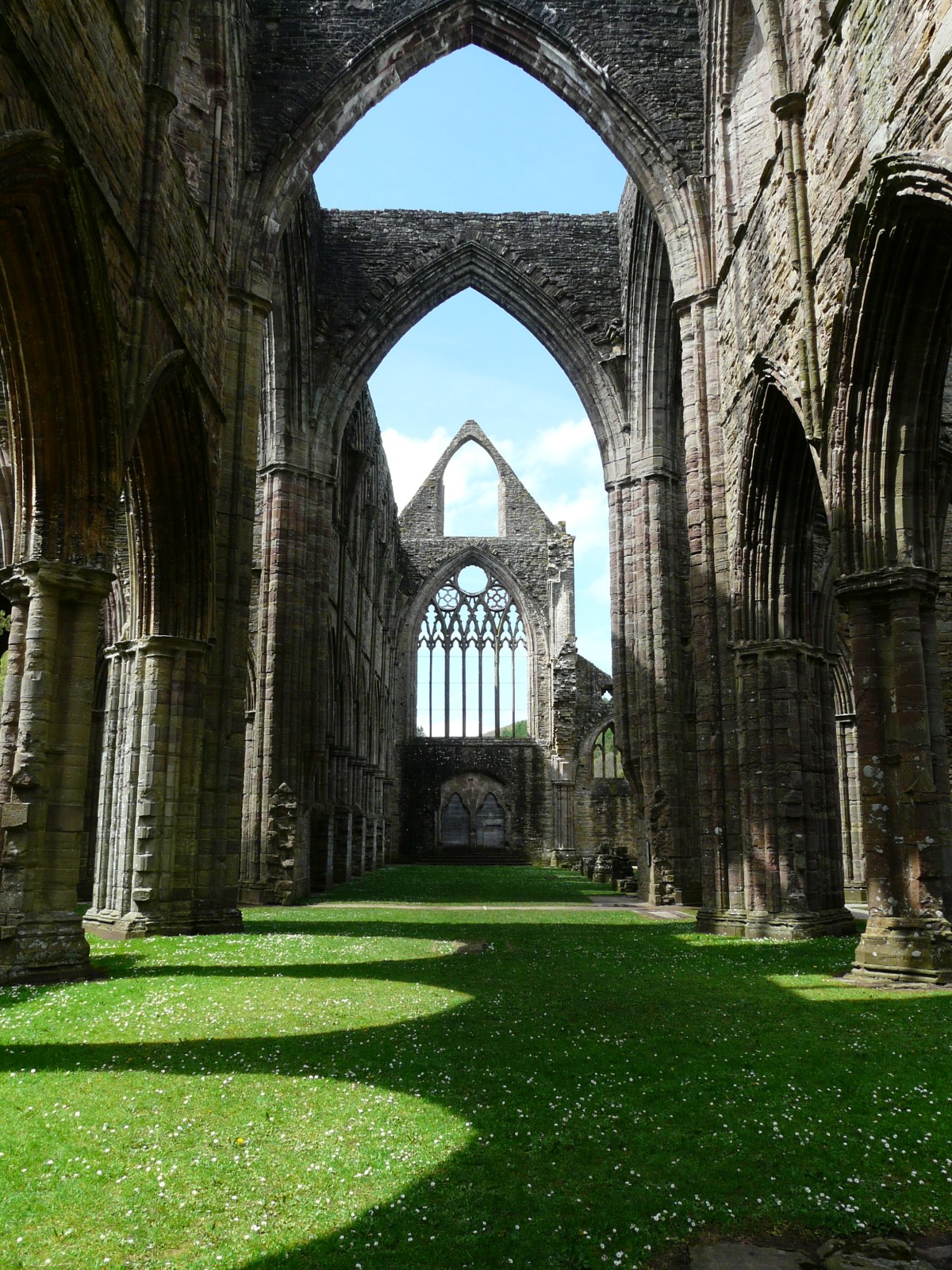 The ruins, situated in the Wye River Valley near the border between Wales and England, were once a monastery dating back to the 12th century. It was the second Cistercian abbey in Britain and the first in Wales. Founded by monks from France, its inhabitants followed the Rule of St. Benedict. A monk here lived a life of prayer and work, mostly in silence.

According to the Ancient and Medieval Architecture website, Tintern was one of the few Welsh abbeys that avoided the destruction caused by the wars of Edward II, because it was located in a remote, isolated place. It struggled through the mid-14th-century period of the “black death” and financial problems at the beginning of the 15th. Pilgrims’ donations helped keep it afloat, as a statue of  Our Lady in the chapel was thought to have miraculous powers.

But under King Henry VIII, it was a victim of the first Act of Suppression, which dissolved all religious houses that did not achieve an annual income of 200 pounds. The buildings of the dissolved monastery were given to Henry Somerset, Earl of Worcester in 1549. He dismantled the roofs to gain valuable lead, which started the degradation of the medieval buildings.

The Ancient and Medieval Architecture website describes the different parts of this once vibrant monastery and offers photos of what a reconstructed Tintern Abbey might look like. It describes, for example, the main refectory, where the community gathered once a day for a silent meal, “consisting of bread, vegetables and beer or fish and eggs on Lenten Days.” Here, there were stairs leading to a pulpit from which a designated monk did a spiritual reading during meals.

Then there was the “warming house”:

On the eastern side of the refectory, there was a much smaller, rectangular, rib vaulted warming house. It was the only, apart from the kitchen and infirmary, constantly heated room, also used for the phlebotomy recommended by the then medicine. In the center of the room was a fireplace supported by four columns. Narrow passages on its sides allowed access to fire from all sides. The upper floor was probably occupied by a small vaulted archive, where the most important monastery documents were kept in a dry place. Next to it on the east side of the first floor was a larger room, illuminated from the cloister by three small windows and two on the north side. The space on the eastern side of the warming house was filled with a passage from the so-called day stairs leading to the dormitory and archive. The portal downstairs led to the rear yard, where perhaps wood for burning in the fireplace was stored.

As the abbey was left in ruins following the Reformation, it only grew in the imagination of the public. Beginning in the second half of the 18th century, tourists flocked to places considered to have “Romantic” value, and the wooded slopes of the River Wye became a popular destination. The ruins of the abbey were considered the highlight of the area.

“At this time the site was owned by the Duke of Beaufort,” says a website dedicated to the history of Cistercian abbeys. “He was passionate about the heritage left to him and set about preserving the abbey as the perfect gothic ruin.”

Tintern Abbey has been celebrated in literary and art works. J.M.W. Turner made pencil sketches, which later became the basis for some of his water colors. The abbey is mentioned in the title of a poem by William Wordsworth, “Lines Composed a few miles above Tintern Abbey, 13 July 1798,” thought it is not the subject of the work.

In 1901 the site was recognized as a monument of national importance and the property was sold to the Crown. A restoration program was set in motion. The site is now under the care of Welsh Historic Monuments.