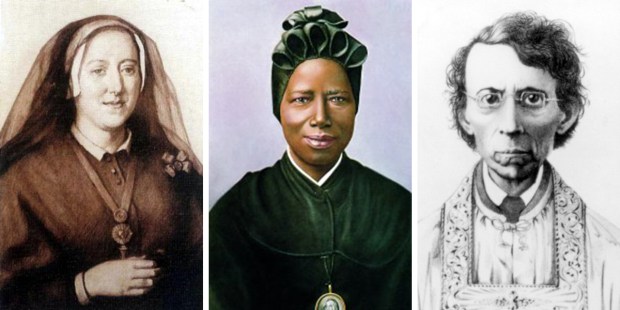 As we work to end this horror, here are some saints to call on.

Though it’s easy to assume that slavery is a thing of the past, finally eradicated around the world in the 19th century, human slavery remains a global tragedy. Tens of millions of people are enslaved throughout the world, trafficked in every nation, in every type of neighborhood.

Rather than turn away from a problem that seems to be beyond our reach, Christians (and all people of good will) must educate ourselves on what we as individuals can do to oppose human trafficking and which organizations we can support. As we pray and research, we can find inspiration in those saints who worked to liberate enslaved people and to end human trafficking.

St. Vitalis of Gaza (d. 625) was a hermit who returned to the city after decades in the desert and began visiting a different prostitute each night. The faithful were scandalized until he was killed in the street and hundreds of reformed prostitutes came to his funeral. Only then did the Christians of Alexandria discover that each night, Vitalis had told the women he was buying them one night without sin. Then he would tell them of Jesus’ love, pray with them, and even arrange marriages for them or find them convents to enter, all at the cost of his reputation and ultimately his life.

Read more:
This man founded one of the Church’s most fascinating religious orders: for female ex-cons

St. Anselm of Canterbury (1033-1109) was an Italian philosopher, abbot, and ultimately archbishop of Canterbury. He convened the Council of London, at which he condemned the slave trade in these words: “Let no one dare hereafter to engage in the infamous business, prevalent in England, of selling men like animals.” This decree did not have the force of law, but it worked with other influences to end slavery within England by the close of the 12th century — though participation in the slave trade continued in Britain until 1833.

St. Peter Nolasco (1189-1256) was a French nobleman during a time when many Christians were being captured by Muslims and sold into slavery to Muslim captors. To combat this, he founded the Order of the Blessed Virgin Mary of Mercy, whose members took a fourth vow to give their “whole substance and very liberty to the ransoming of slaves,” even if it meant offering themselves as a hostage. Many of his followers went on to be martyred in the course of this work, but the men freed some 70,000 enslaved people down through the years. Today, the friars work among the imprisoned, the poor, the sick, and those living with addiction.

Venerable Felix Varela y Morales (1788-1853) was a Cuban priest and statesman. When he was sent as a representative to the Spanish Parliament, Varela took the opportunity to speak out in favor of the abolition of slavery and the freedom of Spanish colonies, though he knew such abolitionist sentiment would likely mean execution as a traitor. Mercifully, he escaped to New York before his death sentence was carried out. There he spent the rest of his life serving immigrant communities (particularly the Irish) and working to form the Catholic Church in America as one that was supportive of immigrants.

St. María Micaela of the Blessed Sacrament (1809-1865) was raised at the courts of various European monarchs. After meeting a well-to-do young woman who had been drawn into prostitution, María Micaela founded a home for women who were trying to leave prostitution behind. This eventually developed into the Handmaids of the Blessed Sacrament and of Charity, who work for the freedom, healing, and social re-integration of trafficked women. Mother María Micaela endured scorn and slander, opposition and threats, and even physical violence but refused to abandon the women who needed her. Her Sisters are active in over 20 countries today.

Read more:
These 8 organizations are leading the critical fight against sex trafficking

St. John Mary Kiwanuka Muzeeyi (1857-1887) had been kidnapped and sold to the king of Buganda as a child; when he was given his freedom later, he had a heart for captives. Soon after he converted to Catholicism, Muzeeyi made private vows of poverty, chastity, obedience, and caring for the sick. His vow of chastity led him to spend all his money on the evangelization of non-Christians and the ransom of slaves. When the persecutions began, he fled with many of these liberated captives into the wilderness, where he continued to instruct them in the faith. When the king deceitfully declared that he had forgiven the Christians, Muzeeyi emerged from hiding to test the king’s sincerity and was killed in the persecutions that killed St. Charles Lwanga.

St. Josephine Bakhita (1869-1947) fought for herself, and in doing brought freedom to many. Kidnapped and sold from one master to another, Bakhita eventually refused to move with her enslaver. She was a catechumen and would not leave until she had been baptized. The case ultimately went to the courts, which decided that Bakhita (and others like her) had been free from the moment she set foot in Italy. In fighting for justice for herself, she put the final nail into the coffin of publicly accepted slavery in Italy.