Jesús Cabello, the boy the Virgin saved from leukemia 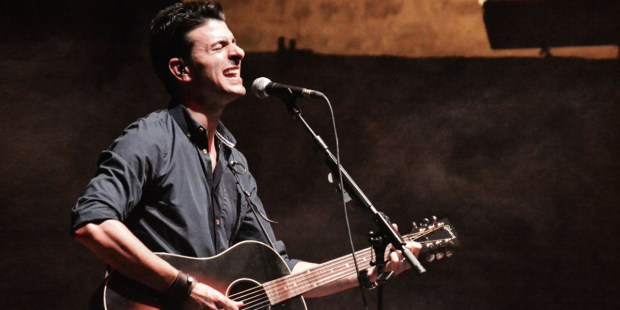 A promise his parents made when he was gravely ill as a child is being fulfilled decades later in a ministry through music.

Jesús lives in Cordoba with his wife Paloma and his 7 year-old son. He’s 36 years old and grew up in Puente Genil, a village near the city. He’s the youngest of four children and is a teacher of Language and Literature at a public school. His life sounds very normal, but Jesús’ life has been unusual since he was 18 months old.

When he was only a year and a half, Jesús Cabello was diagnosed with leukemia—a serious disease with a high mortality rate. Being so young, he was given a very powerful course of treatment, but he didn’t react like other kids:

“My hair didn’t fall out and I never lost my vitality, whereas many of my companions suffered irreversible consequences. But the tests said that the treatment wasn’t working.”

Eventually the cancer went into remission, but Jesús suffered a serious relapse when he was only 4 years old, and his parents “fought with God.” A bone marrow transplant was judged too dangerous, and at that moment of “abandonment, despair and surrender” his father went to a church and stood in front of the tabernacle and a statue of the Virgin Mary said, ‘If it is God’s will, [I’ll] let him go … but if he stays, it will be to serve you.’”

It all happened so fast. In the course of barely two hours, they put little Jesús in the car, took him to the hospital, admitted him to the emergency room, and gave him another test. The doctors’ response was surprising, to say the least: “The tests showed that the cancer was going into remission,” Jesús says. On top of that, he says, “When I was 8 years-old, they removed a lymphoma in my neck that they had never seen before; and I had lived with it for four years,” without symptoms.

The doctors attribute the event “to the fact that children’s metabolism changes very quickly and is unpredictable.” Jesús’ family has a different theory. “The cause and effect of my mother’s prayer and the test with that news … Well, it makes it seem like something supernatural.”

Javier didn’t learn until years later how exceptional his experience was. He said,

“My parents, with the best of intentions, made me believe that I’d been a normal child. I thought that all children go through that, that they get poked in the back, that they get admitted to the hospital …”

Jesús only learned at the age of 14 the full truth about how his illness. It was a watershed moment for him. He began to become obsessed with a question: What was he doing in this world? What did God want from him?

Read more:
Two musician dads see God through their children and make this video about it

The Chapel of Divine Providence

Jesús was looking for answers, and at the age of 17 he was invited to a retreat. There, he prayed in a chapel, where he’d have an experience that would change the direction of his life:

“In a moment of prayer, I had an impressive encounter with Jesus Christ; I felt an embrace that changed my life. From then on I knew that Christ is alive and that I have a mission.”

Jesús had never had a girlfriend, so he started to think about a religious vocation. The following year, he returned to the same retreat, and consulted a priest. “He told me: God might surprise you during this retreat.” That same evening, at the age of 18 on a silent spiritual retreat, he met the girl who was seated in front of him at dinner, and who served him some soup; she would become his wife seven years later. Their marriage took place in that same chapel.

Eleven years later, Jesús is clear about his mission alongside his wife, Paloma. “God wants me here for someone or something. I go out because I know I will meet Jesus,” Jesús says.

Jesús’ story doesn’t end here. Jesús Cabello—when he’s not teaching classes at the school—composes and records Catholic songs. His family and his faith brought him to this ministry. He says,

“At home, all my brothers played the guitar, and in my house we always used to sing. I started playing [guitar] with a parish choir when I was young, and at the age of 17, after my encounter with Jesus, I started writing.

A friend asked me to record a tape, and he passed it on to someone else … I was invited to play in a concert, then I was asked to play in a parish … And I ended up singing in Milan with the pope in 2012 with a million people in front of me, singing in Krakow, at the WYD in Panama …”

You would never know it from the outside, but Jesús has not had a “normal” life. Deep down, none of us has. He discovered this, found his mission in the world—as we all should—and has dedicated himself to it.

Music is his passion, but his family even more so. He loves to glorify God through music, but his musical aspirations always come second to his family. He says,

“There’s a gift that must be multiplied and put at the service of God. When we got married we saw that this is a family mission. But I won’t change my life to be a full-time performer. Could I sacrifice my family for a personal dream? No way!”